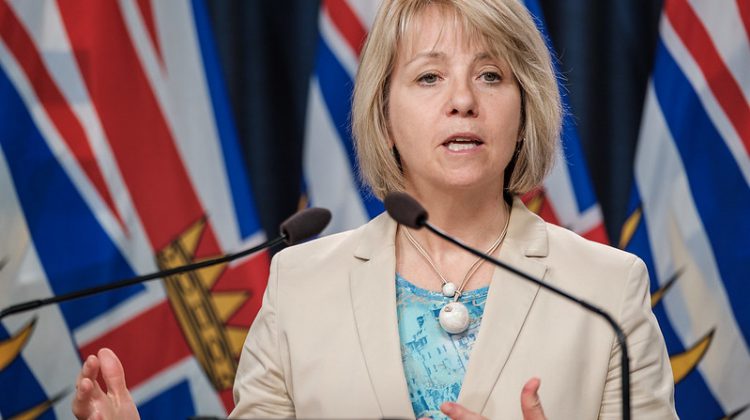 Following a number of days with record-breaking case counts, the Province has made the call to place a number of enhanced measures to protect the public from COVID-19.

The new rules will be in effect starting on Thursday, November 19th, and will continue until December 7th at the earliest, and will be expanded further if needed.

Dr. Bonnie Henry announced on Thursday that all gatherings and events will be banned whether they are indoors or outdoors.

“We need to only socialize with our immediate households, we need to delay inviting over friends and family for this period of time and reduce our social interactions as much as possible outside of the home,” said Henry.

Previously, the limit on event sizing was a maximum of 50 people, but a blanket ban on public gatherings has been enacted.

Henry said private gatherings should be limited to immediate households only. This can include roommates or up to two people you regularly spend time with, of you live alone.

Places of worship will no longer be allowed to have in-person services for a period of time.

“We need our faith services more than ever right now, but we need to do them in a way that is safe. With the community transmission that we’re seeing, and the fact that we’re seeing transmission in some of our faith-based settings, we need to suspend those and support each other and find those ways to care for each other remotely,” explained Henry.

There are some exceptions, however, including weddings, funerals and baptisms, which will have a limit of 10 people, including the officiant. However, receptions associated with the events will not be allowed until further notice.

Narcotics and Alcoholics Anonymous meetings will still be allowed to go forward with a limit of up to 50 people, as long as COVID-19 safety plans are in place and being acted on.

Work meetings, work in a home, and picking someone up are also exempt from the ban on gatherings.

Henry has also declared that masks will be mandatory in all indoor public spaces, again, with some exceptions.

According to Henry, the step to make masks mandatory on a provincial level was included because a number of retail and other private sector businesses requested the change. Staff, however, must wear a mask at all times in a resteraunt.

In a restaurant setting, customers will be required to wear a mask when they are not at their table, meaning that it must be worn when entering, exiting, or going to the washroom.

“If you are at work, at your desk, you do not need to wear a mask, but if you are in a shared workspace, common space or public space like elevators, hallways, or other common areas, you do,” said Henry.

Those working behind a plexiglass barrier are also not required to wear a mask unless there are others are in the same area.

The rule will not apply to people under two-years-old, or people with a disability that makes it difficult to put on and take off a mask on their own.

As a result of the rising cases, Henry is imploring British Columbians to limit their non-essential travel, but has stopped short of an official ban.

“It is our expectation that everybody in B.C. will limit their travel as much as possible, unless it is essential. We’re limiting our recreational and travel for social reasons that we’re talking about. This includes travel within the province and travel to other parts of Canada,” said Henry. “Of course, if you need to travel for work, or a medical appointment, for reasons that are essential, that does not apply.”

Residents are urged to stay local for recreation and consider hitting the slopes at home rather than traveling elsewhere.

“I absolutely recognize that tourism is important to our communities and our economy, and the significant efforts that many tourism businesses have put in place,” explained Henry. “We are asking people coming from outside of B.C. in the next two to four weeks, if they can postpone their trip, they should. If not, they should be aware of the orders we have in place here, and the orders are enforceable.”

Students returning home are asked to keep to their household for the time being.

Traveling for sports will also be disallowed for the time being, even within the region.

Henry said reduced travel will help slow the spread of the virus, and keep pressure off of hospitals, protect the vulnerable population and allow businesses to keep running.

As the Province deals with the increase in cases, it has looked at ways to better manage indoor group physical activities.

Businesses that organize high-intensity indoor activity, including hot yoga, spin classes, and interval training, must be closed until further notice.

“It’s those closed environments where we have people close together, where we’re exerting and have poorer ventilation. Those are the settings that are most at-risk, and we’re seeing around the world that those are challenging settings and they invite this virus to spread,” said Henry.

Other group indoor activities can still operate, but they must do so under the updated guidance, which will be posted in the coming days.

“If their plans are not followed intensely, we can have transmission. We will be monitoring this and we will be shutting down gyms or studios where these safety plans are not being followed,” explained Henry.

Henry also spoke about reducing contact sports indoors and the risks associated with them.

“We will continue with ViaSport phase 3 activities, with exceptions: there are to be no spectators at indoor or outdoor sports and there will be no travel for any of these sports outside of your local community,” said Henry.

Businesses will have more strict measures to ensure their employees and customers are safe from COVID-19, including more frequent inspections from health authorities.

Workers will be encouraged to stay home as much as possible as well.

“We are asking all office-based employers to temporarily suspend those important efforts to get workers back into their workplaces, and support working from home where possible, until at least the new year,” said Henry.

Henry also asked workers to limit social interactions with co-workers before, during and after work.

Bars and pubs are subject to particular effort to ensure safety plans are being followed, as henry said it is difficult to follow in those settings. Businesses found violating those measures will be closed by provincial health authorities.

“This is the time for everyone to pay attention and make sure you revisit and step up your safety efforts to ensure these protocols are fully implemented,” said Henry. “This means that all businesses and workplaces across the Province must conduct active daily health screening.”

Businesses must also ensure physical distancing is being done between workers and customers, masks are worn and all rules are being followed.

B.C. is reporting 536 new COVID-19 cases across the province, 28 of which were confirmed in the Interior Health (IH) region.

As of Thursday, the Province has 6, 926 active cases, with 217 patients who are currently hospitalized, with 59 admitted to the ICU.

Meanwhile, data from the B.C. Centre for Disease Control said the IH region has 223 active cases, with two being hospitalized and one in the ICU.

IH has reported 946 total recoveries, while 17,206 people have recovered province-wide.