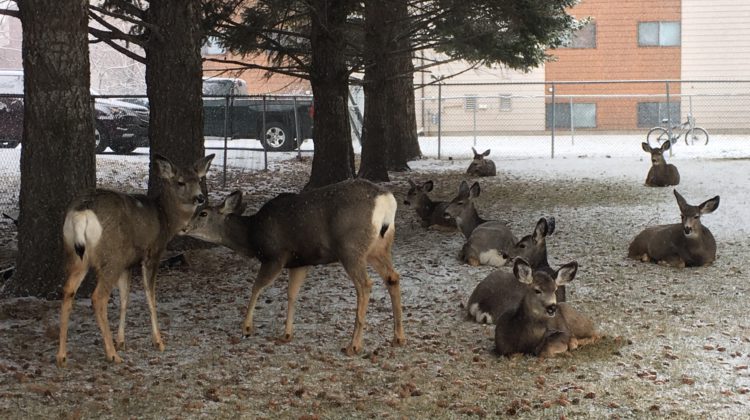 The City of Cranbrook is putting pressure on the B.C. Government to manage urban deer, noting the province’s own concerns about Chronic Wasting Disease.

Below is the full motion approved by City Council:

“That Council request the Province of British Columbia to step in and actively manage the urban deer herd in the City of Cranbrook, in order to prevent Chronic Wasting Disease (CWD) from infecting the local deer population, and minimize the risk of potential CWD transfer to other urban wildlife, pets or residents.”

CWD has not yet been confirmed in British Columbia, but 64 white-tailed deer, mule deer, and moose contracted the disease near Libby, Montana in 2019. According to the B.C. Government, it’s the first time CWD has been detected west of the Rocky Mountains.

As a precaution in 2019, hunters were required to submit white-tail and mule deer heads for testing and must do so again this hunting season.

While the B.C. Government said CWD is not known to infect humans or non-cervid animals, the East Kootenay has been pegged as a high-risk entry point for the disease given white-tailed and mule deer’s travel across the Canada-United States border.

“The Province says they’re our deer but they make the rules – so you deal with it, but we have to deal with it through their rules and we know that their rules – I mean let’s be honest, they’ve been totally unsuccessful, their deer culls have been a waste of time and money.”

“We were of the opinion I think that we weren’t going to do a cull anymore because it’s just a waste of time and money but now the Province is telling us we have to deal with these deer,” Pratt told MyEastKootenayNow.com. “They’re concerned, so if they’re concerned then you deal with it. This is a perfect time for us to put the onus back on the Province, which we’ve been talking about for years.”

Wes Graham, Cranbrook City Councillor said they are pushing the Province to deal with the urban deer problem that communities like Cranbrook and others face.

“They need to step up and provide protection and safety for the residents.”

The City of Cranbrook has undertaken several deer culls over the past number of years after the B.C. Government provided the cull as one of the only available options for population management. Cranbrook has specifically run into issues of trap vandalism, hampering efforts of the cull. The City did participate in a translocation study in 2016 and has explored other deer management options as they were presented by the B.C. Government.