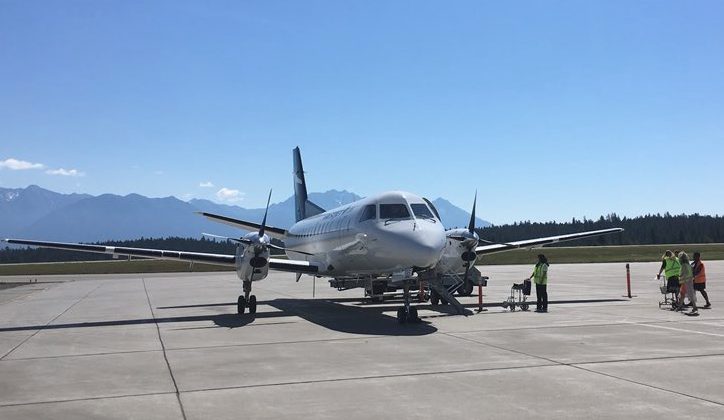 WestJet’s arrival in the East Kootenay and their new flight service out of Canadian Rockies International Airport has local Mayors and MLAs excited for further growth, tourism, and development in the region.

Having the inaugural flight land in Cranbrook Wednesday from Calgary, the elected officials and dignitaries celebrated the new service with WestJet and the airport. Those including local MLAs Doug Clovechok and Tom Shypitka, along with Cranbrook Mayor Lee Pratt and Kimberley Mayor Don McCormick.

“From the standpoint of the City and the area, basically it opens up the world to us, it’s connections of places at a convenient time and level of pricing that everybody can afford,” Lee Pratt told those in attendance Wednesday.

Doug Clovechok, MLA for Columbia River Revelstoke, said during the ceremony that the WestJet Link service will drastically help tourism across the entire region.

“I’m really excited to see this because this will provide opportunities for tourism growth,” said Clovechok. “I know that there’s going to be an excellent opportunity for outbound traffic, but we’re really going to work hard and get that inbound traffic and fill this Valley with people.”

“It’s going to really open the doors, transportation is the number one key critical issue of opening any tourism area and now we have more access to Calgary and Vancouver,” Clovechok later told MyEastKootenayNow.com.

Tom Shypitka, MLA for Kootenay East, echoed Clovechock’s sentiments, noting that without the current growth in the region, a national airline carrier like WestJet wouldn’t have wanted to expand to Cranbrook and area.

“What really put the ball on the goal line, in my opinion, is the success of our regions, the success of our people here,” Shypitka said during the celebration. “Our communities are growing, we are marketing ourselves to the world and we’re being recognized for it. The [WestJet Link] service enables us to grow further, it gives investors confidence that this region is growing in the right direction.”

“This is something that’s been a long time overdue I think but we’ve been working on it hard and I think we’ve got all our ducks in a row and this is going to be a successful venture and I couldn’t be more excited about it,” Shypitka told MyEastKootenayNow.com. “We have a lot of growth opportunities here in this region and this is just one of the many steps that’ll take us there.”

Kimberley Mayor Don McCormick said it’s one thing to have a good level of service for those leaving the community on flights to Calgary and around the world, but the incoming opportunities are what make the WestJet service so important moving forward.

“We have this ingrown desire to drive because we have to, whether it’s Calgary or Spokane or Kalispell, and there is no reason to do that,” McCormick told MyEastKootenayNow.com. “We have a level of service now at this airport with the addition of WestJet that is on par with any other airport, not just in the province, but in the country.”

Although Mayor Lee Pratt was excited that WestJet partnered with Pacific Coastal Airlines to make the new WestJet Link service a reality, he said it won’t be successful without the support of residents and those choosing Canadian Rockies International Airport as an alternative form or travel.

“We have to get behind it, it’s not up to them to make it successful, it’s up to the residents here that could use those services. It’s all of the East Kootenay, right from the West Kootenays, to the Columbia Valley, the Cranbrook /Kimberley area, the Elk Valley, it opens up a lot of opportunities for us.”

WestJet partnered with Pacific Coastal to access their Saab 340B aircraft, a 34-seat airplane that they can now use to service the market. Before the partnership, WestJet’s smallest plane in their fleet was a Bombardier Q400 which seats 78 and is to big to consistently service Canadian Rockies International Aiport.

The WestJet Link Service will see three daily flights from Cranbrook to Calgary and two flights on Saturday.