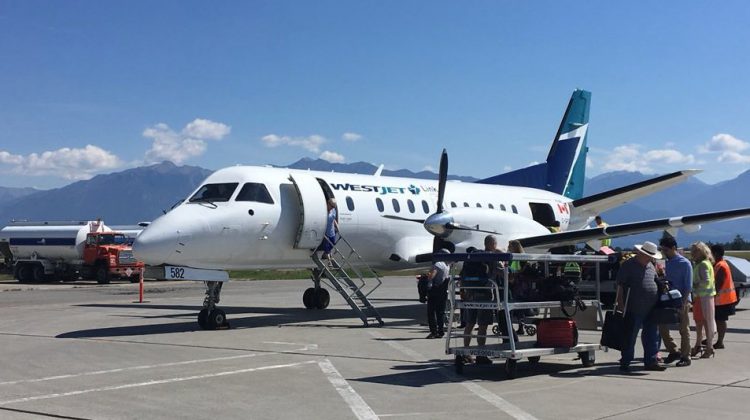 Dignitaries and officials gathered at Canadian Rockies International Airport Wednesday morning for the inaugural WestJet flight into the airport, as the airline launched its new WestJet Link service.

“What I’m most delighted with really is this incredible partnership between our legacy carrier here at the airport of Pacific Coastal Airlines, that have been partnering with us for a long time, to see them work with WestJet to make this growth a success makes it just that much more special,” said Tristen Chernove, Manager of Canadian Rockies International Airport.”

“This is a very exciting day for WestJet and for WestJet Link, it’s also an exciting day for people of the East Kootenay because we have been hoping to serve Cranbrook for a long time but never had the right aircraft,” Robert Palmer told MyEastKootenayNow.com, Manager of Public Affairs with WestJet. “What this partnership between ourselves and Pacific Coastal does, it’s called a Capacity Purchase Agreement, is it enables us to have access to the right size of aircraft.”

WestJet will be using a Saab 340B aircraft for all their flights in and out of Canadian Rockies International Airport.

“The Saab 340B is one of the most popular commuter aircraft around the world, it has 34 seats on it so it’s a little less than half the size of WestJet’s smallest aircraft which is a Canadian-made 78-seat Bombardier Q400, so even that aircraft was a little bit too large for this market,” added Palmer. “Having the Saab 340B with 34 seats gives us the right sized aircraft with the right frequency, three times a day and twice on Saturdays, to be able to serve this market and really be able to set us up for success.”

The launch of the service in Cranbrook also coincides with the start of flights from Calgary to Prince George, Lethbridge, Lloydminster, and Medicine Hat.

Chernove said that WestJet coming to Cranbrook and Canadian Rockies International Airport is only due to the public’s increased interest of flying and using their local airport rather than using their own vehicles.

“Air service growth is always driven by passenger loads and numbers, there’s no other way to do it,” Chernove told MyEastKootenayNow.com. “It’s the patrons of the Kootenay region that are finding the value of flying through this airport and utilizing it, that are allowing the growth to be successful and continue.”

Among the dignitaries at the ceremony and celebration were Lee Pratt and Don McCormick, respective Mayors of Cranbrook and Kimberley, Tom Shypitka, Kootenay East MLA, Doug Clovechok, MLA for Columbia River-Revelstoke, Wendy Booth, Vice Chair of the Regional District of East Kootenay, while Federal MP Wayne Stetski and the Ktunaxa Nation also had representatives at the event.