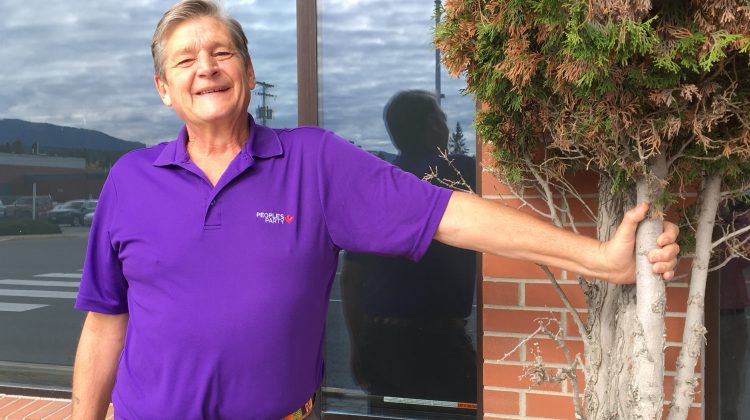 Rick Stewart, a retired forester and former member of the Canadian Forces, is running against five other candidates to make his mark in Kootenay-Columbia politics. He is running with the People’s Party of Canada, which formed just over a year ago, on a platform of stimulating the economy, building the Energy East pipeline, and getting better trade deals for Canada.

Stewart, a Nelson area resident, originally attempted to run with the conservative party but was edged out by Rob Morrison. He joined the PPC when Maxime Bernier formed it and was later nominated to run in the Kootenay Columbia Region.

Stewart feels the government has not been heading in the right direction, and he and his party can correct it.

“There’s a lot of hypocrisy in today’s government, and I believe that we need a government that truly does put Canadians and Canada first. A party that believes in a sovereign nation and a government that works for people,” Stewart told MyEastKootenayNow.com. “I think that our government has wandered from its constitutional responsibilities, and it’s time for people to voted for a party that really does want to make that kind of a change.”

Stewart spoke of some of the top priorities of the PPC, focusing the construction of a pipeline to transport oil from Alberta to Eastern provinces.

“[We will] coordinate with the provinces, and immediately change the question overnight from ‘should we build a pipeline’ to ‘what’s the best way we’re going to build it,’ and that’s the stage we need to be at. A PPC government would do that immediately,” Stewart said.

Stewart expressed concerns over stifling the economy in favour of climate change programs.

“The big push, and maybe you could even say the fashion, in today’s politics is the climate crisis,” Stewart said. “I hear governments wanting to reduce CO2 levels – the science is not proven on that, and there’s a lot of push-backs.”

If elected, Stewart does not plan to let climate change policy interfere with the economy.

“There’s uncertainty in climate, but there’s no uncertainty when it comes to our prosperity, and if we don’t have a working economy in this country, we will all for sure be living in poverty”

He feels that a policy of focusing on trade negotiations will help stimulate Canada’s natural resources and allow groceries to be more affordable.

“Supply management – if we phase it out, take out that entire program, we would not only save consumers 3.6 billion dollars a year for cheaper eggs, butter, and milk, It would also allow us to renegotiate with Americans in regards to softwood lumber.”

With a background as a professional forester, Stewart also expressed concerns for the BC lumber industry, wishing to renegotiate on trade deals.

“With softwood limber right now, every time we send a load of it south of the border, there’s a 22% countervailing duty, and it’s putting our mills out of work, it’s destroying our towns and our families. There’s a lot of people that are hurt really badly by this issue,” said Stewart.

Speaking of accountability in government, Stewart brought up policies put forward by other parties.

“There’s nothing free. I see the Greens and the NDP offering up free dental and free pharmacare, well that’s a 40 billion dollar bill. So where is this 40 billion dollars going to come from?” Stewart concluded.”These people are making big promises with no accountability, and that too has to end.”

Rick Stewart is one of six candidates in the running in Kootenay-Columbia, as Wayne Stetski of the NDP, Robin Goldsbury for the Liberals, Abra Brynne from the Green Party, Rob Morrison for the Conservative Party, and Trev Miller for the Animal Protection Party are all looking to be the riding’s next Member of Parliament.