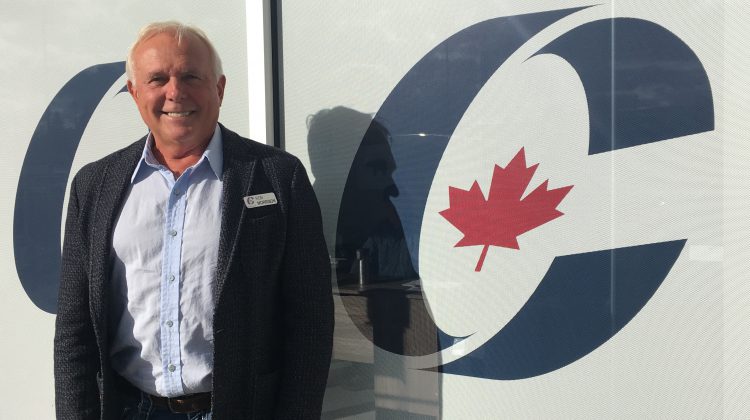 Rob Morrison, MP of Kootenay-Columbia for the Conservative Party in front of his campaign office for the 2019 federal election. (Bradley Jones, MyEastKootenayNow.com staff)

Rob Morrison is hoping to turn Kootenay-Columbia back to Conservative blue after four straight terms from 2004 to 2015, and he hopes to do that with a platform focused on jobs, finances, and international trade.

Coming to the Kootenay-Columbia region in 1977 from Alberta, Morrison has lived in Creston, Nelson and Cranbrook, with extensive experience overseas. Working as a Diplomat with the Department of Foreign Affairs in Islamabad, Pakistan, Morrison was responsible for 17 countries in the Middle East, as well as in Central and Southeast Asia. Morrison also served as the Director General with the Treasury Board Secretariat working on an information-sharing system with all differing law enforcement agencies and foreign governments.

“My background has kind of helped me look at what’s happening in Canada right now and with my experience I know I can be of value to the political system, especially with the Conservative Party,” Morrison told MyEastKootenayNow.com.

Speaking about the Conservative Party’s platform for the 2019 federal election, Morrison said that jobs are his number one priority.

“Security with jobs in the sawmills, softwood lumber industry, in our mines, for example the Elk Valley, and the energy sector,” said Morrison. “I wasn’t surprised but it’s interesting the number of people who are directly affected by the energy sector and indirectly affected for tourism and for businesses that are using or having the Albertans and different people coming to our Kootenay-Columbia riding.”

Another important piece to Morrison’s hopes for Kootenay-Columbia and Canada is having a balanced budget and financial accountability.

“People are worried about deficit spending,” Morrison told MyEastKootenayNow.com. “I don’t know if people are realizing when we keep spending money we don’t have our children will end up paying for that, so how much can we actually spend before our children are overwhelmed?”

With his background in foreign policy and international relations, Morrison would like to see continued investment and trade in the energy sector and other sectors so Canada can grow its tax base and spend responsibly.

“Those taxes can go to helping with infrastructure, with health care, seniors, with young families, making it affordable, which we’ve been advertising tax cuts and tax credits for children and seniors and veterans over the last couple of weeks.”

Morrison said the Conservatives would also look to utilize those taxes for an environmental plan using experts and scientists to guide the government to be more efficient with their fossil fuels, while also developing clean energy plans for the future.

“I’ll take those messages to Ottawa,” said Morrison. “It is time for leadership. Throughout my career, I have been a leader and I’ve demonstrated that internationally as well as federally and it’s time for us to look at that and say we need a leader for our Member of Parliament.”

Rob Morrison is one of six candidates in the running in Kootenay-Columbia, as Wayne Stetski of the NDP, Robin Goldsbury for the Liberals, Abra Brynne from the Green Party, Rick Stewart from the People’s Party of Canada, and Trev Miller for the Animal Protection Party are all looking to be the riding’s next Member of Parliament.