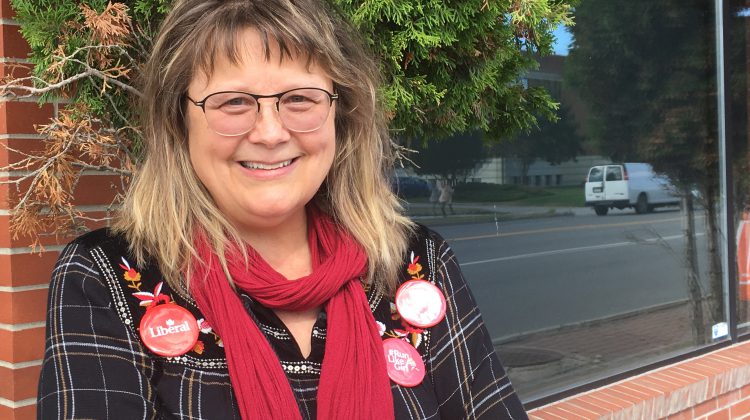 Robin Goldsbury hopes to be the next Member of Parliament in Kootenay-Columbia as she runs for the Liberal Party in the federal election, with a focus on rural vitality, climate change and the region’s geographic fragmentation.

Living in the Kootenays for more than 30 years, Goldsbury has operated a number of businesses across the region. Goldsbury and her husband started the Kootenay Cone Company, one of the first botanical collectors in British Columbia which employed up to 45 people in its prime. As well, Goldsbury once owned the Nomad Motel and currently operates the Dock ‘N’ Duck Pub, Grill, and Lodge at the Kootenay Lake Ferry in Balfour.

Familiarized with the issues of the area, Goldsbury believes she’s the right candidate for Kootenay-Columbia and one that will be a strong and experienced voice for the region.

“I know the issues, I remember Cranbrook 2000, I remember when you could pick up a house in Kimberley when the mine closed down for nothing,” Goldsbury told MyEastKootenayNow.com. “I remember the bad times, I remember the good times and I’ve invested heavily, everything I’ve got, in my Kootenay-Columbia and so I want to see that we have the best representation.”

Goldsbury is launching her Cranbrook Campaign Office on Thursday, September 19, 2019. Serving as her Liberal Campaign Headquarters, Goldsbury and her team are holding their grand opening evening from 3:00 pm to 7:00 pm at their office at 911 Baker Street.

Knowing that Kootenay-Columbia is a rural riding, Goldsbury said many of the issues the region faces aren’t the same urban issues that are focused on in Ottawa, wanting to be vocal for the rural issues if elected.

“We have complications or often government policy affects us differently and we need a strong voice, a Kootenay voice, a knowledgable voice saying, hey we need to be heard, we’re having effects here, we’re the grassroots here and it’s affecting us, and I think I can be a very effective voice.”

Party politics aside, Goldsbury said she wants to be the best representative for the region, knowing the challenges that everyday residents face across the riding, and waning to advocate on their behalf.

“When you’re in rural Canada and you don’t have those services right next door, you got to find a way and jerry-rig it and make it happen. I think using creativity and effort and collaboration, we can have someone who’s either going to knock those doors down and get our voice heard in Ottawa or someone who is actually sitting at the table,” Goldsbury told MyEastKootenayNow.com. “My ultimate allegiance is to the Kootenay-Columbia, this is my home and I think it’s really important that we have someone standing up for us.”

As for her specific platform and key issues, Goldsbury said she’s passionate about rural vitality, whether that’s addressing urban migration or climate change, or succession in business and services. Aware of the geographic fragmentation across the region due to the large riding that is Kootenay-Columbia, Goldsbury would like to collaborate and provide more support to communities, groups and organizations that are trying to accomplish similar goals.

“I think we need a proactive Member of Parliament, not somebody that’s waiting for you to come to them, but somebody that’s going out there and saying, okay let’s pull this together, let’s have an umbrella where we can actually have a stronger voice, where we can collaborate, where we can say, okay you’ve got this issue and you’ve got this same issue how can we work together here? I think that takes work and you can’t be lazy to do that and you need somebody who is willing to work hard, you need somebody who is willing to step up and pull it together.”

Robin Goldsubry is seeking the seat in Kootenay-Columbia against five other candidates which includes Rob Morrison for the Conservatives, Wayne Stetski for the NDP, Abra Brynne for the Green Party, Rick Stewart for the People’s Party of Canada, and Trev Miller for the Animal Protection Party.

The federal election is October 21, 2019 as voters will cast their ballots to elect their next Member of Parliament and their next federal government.