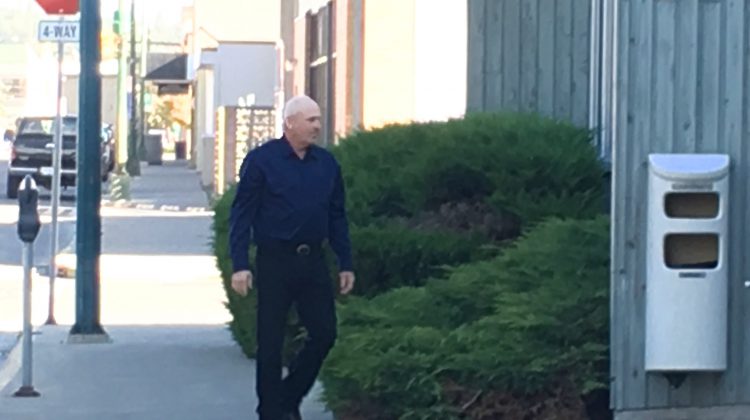 James Oler arriving at Cranbrook B.C. Supreme Court on August 29, 2019 to hear his sentence for removing a child from Canada for a sexual purpose. (Bradley Jones, MyEastKootenayNow.com staff)

James Oler has been sentenced to 12 months imprisonment and 18 months probation for removing a child from Canada for a sexual purpose.

In Cranbrook B.C. Supreme Court, Madam Justice Martha Devlin ruled that James Oler had orchestrated the removal of a 15-year-old girl, whose identity is protected under a publication and, in June 2004 to be married into a polygamous relationship with another member of the FLDS (Fundamentalist Church of Jesus Christ of Latter-Day Saints).

Before the sentencing was delivered, in a rare expression, Oler used the opportunity provided to him by Devlin to stand before the court and make a statement.

He first read a poem from his daughter entitled, “There’s A Lot Of Joy In Living”.

“There’s a lot of joy in living,
If we face life with a smile;
Take time to do some kindness,
And go the second mile.
For the greatest joy is giving,
And it all comes back to you
When you add a little sunshine
To all you say and do.
Before the day has ended
Try to do some worthwhile thing,
Help to ease another’s burden
And make a sad heart sing.
You will find each new tomorrow
Will be happy from the start
If you only will remember,
Keep a smile within your heart.”

“Thank you, my lady, for the respect and kindness that you have shown me throughout the proceedings,” said Oler. “I would like to also thank Mr. Wilson, Mr. Rankin, and Mr. Doyle… for their kindness and respect to me.”

From there, Devlin began to read her reasons for sentencing and the circumstances surrounding the case.

Devlin ruled that on June 23, 2004, Warren Jeffs, the Prophet of the FLDS, phoned James Oler and instructed him to bring the 15-year-old girl to be married.

On June 24, 2004, Oler organized a border crossing into the United States, where he rendezvoused and met at a highway pullout, switching vans as they made their way to Mesquite, Nevada. The girl was married a day later to James Leroy Johnson, as the plural marriage was performed by Warren Jeffs and witnessed by James Oler and William Edson Jessop.

“Mr. Oler foresaw with certainty or substantial certainty that (the girl) would be expected to consummate her marriage to her husband according to the FLDS divine mandate to bring children to fulfil the purposes of plural marriage and bring up a royal Priesthood,” ruled Devlin. “He chose her life for her. He truncated and interrupted any individual prospects and future plans she may have had, to effect his own plans, even if he believed them to be divinely inspired.

James Oler, 55, was the former FLDS Bishop in Bountiful, a small and secluded community southeast of Creston.

As per the pre-sentencing report, Oler is known to have more than 30 siblings and 24 children with multiple wives. Oler was convicted and sentenced to one count of polygamy in July 2018.

Banished from the FLDS by Warren Jeffs, Oler reportedly has had no contact with his family and lives a solitary life in Alberta where he sends money to his family as he can to his nephew. Found to be in good health, Oler no longer attends church but reportedly remains “spiritual”.

Devlin ruled that Oler has no remorse for his action or the impacts on the 15-year-old, although Oler did tell the author of the Pre-Sentencing Report that the girl was “elated with her marriage”.

In Devlin’s reasons for sentencing, she said Oler did not act out of financial or sexual gain but out of his strongly held religious beliefs.

Crown originally submitted a sentence of 18 to 24 months. Joe Doyle, amicus curiae in the proceedings and a literal “friend to the court”, suggested a sentencing range of six to 18 months as per the previous sentences delivered by Mr. Justice Paul Pearlman in 2017 against Brandon James Blackmore and Emily Ruth Gail Blackmore. Brandon was sentenced to 12 months for the removal of two young girls while Emily was sentenced to seven months.

“Balancing all of the relevant factors, I am of the view that sentence of 12 months is a proportionate, fit and proper sentence. The sentence is sufficient to denounce Mr. Oler’s conduct and to deter him and others from engaging in such conduct in the future.”

As well, Oler will is under Probation Order for 18 months following his release, must provide a mandatory DNA sample to forensic analysis, and is ordered to comply with the Sex Offender Information Registration Act for 10 years.

“Mr. Oler, the matter before me has come to an end,” Devlin said before the court. “The sentence that I impose on you today cautions you that the law does not have any necessary connection with sincerely held religious beliefs, and it is the law that must prevail where your actions cause harm to those that call out for the law’s protections. Having said that, I have no doubt that these legal proceedings have been a long and difficult process for you personally. I wish you the best going forward.”

After hearing his sentence, Oler was taken away in handcuffs, quiet and somber as the Sherrif escorted him out of the courtroom, thus ending a case 15 years since the offence.