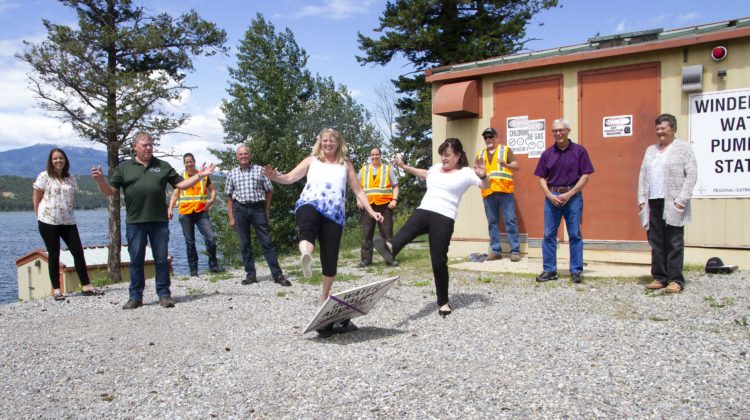 Windermere had cause for celebration on Monday, as the community’s new connection to the East Side Water Service officially ended a significant Water Quality Advisory that was first put in place in 2006.

The Windermere Water System was under the Water Quality Advisory since that time, with the RDEK and the community looking to find long-term solutions to bring the water into compliance with Interior Health.

“This day has been over 15 years in the making and is the result of an incredible amount of work and commitment by so many: from the RDEK Board and staff, to the members of our Utility Advisory Commissions, the community, the contractors and consultants, and the provincial and federal governments who provided funding,” said Susan Clovechok, RDEK Area F Director Susan Clovechok. “We also share this milestone with former Electoral Area F Director Wendy Booth who worked tirelessly to see treated water in Windermere.”

A referendum was first held in 2011 asking residents if they wanted to purchase bulk water to remedy the situation. The referendum was unsuccessful and the RDEK went back to the drawing board, undertaking extensive community consultation. A secondary reservoir was built in 2015 to increase community capacity while work continued on a long-term solution to bring quality drinking water to Windermere. By 2016, the RDEK supported the purchase of Parr Utilities and all of its water assets eventually leading to the community’s connection to treated water.

“From the first referendum in 2011 to the eventual purchase of Parr Utilities and the connection of Windermere to the East Side Water Service, this has been a highly complex project and is a good example of community collaboration and collective problem solving,” said Clovechok. “I want to extend a special thanks to our RDEK staff including Engineering Services Manager Brian Funke, Project Supervisory Elizabeth Ahlgren, CAO Shawn Tomlin, former CAO Lee-Ann Crane and CFO Holly Ronnquist who have been pivotal in this project and its success.”

The RDEK said the final connection was completed in early June, with Interior Health lifting the Water Quality Advisory as of Monday following required testing and a full flushing of the water lines.

See the historic “take down” of  Winderemere’s Water Quality Advisory on Monday below: