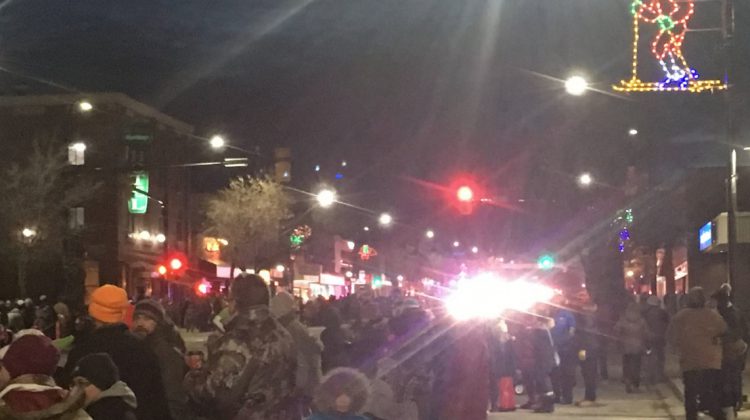 The City of Cranbrook viewed the Santa Claus Parade and Winter Block Party as a major success for the community, providing fireworks, entertainment, and economic impact.

Thousands of residents gathered for the Santa Clause Parade and fireworks show on Saturday, while the Winter Block Party at Western Financial Place also saw huge turnouts on Saturday and Sunday.

“We figure it was a great success even though there was a touch of cold weather we still saw several thousand people come out,” Paul Heywood told MyEastKootenayNow.com, Events and Marketing Manager for the City of Cranbrook.

Heywood said they had 80 entries into Santa’s Winter Block Party at Western Financial Place, which was put together in partnership with the Cranbrook Farmer’s Market. Also working with JCI Kootenay and the Rotary Club of Cranbrook, 35 floats were featured in the Santa Claus Parade down Baker Street as volunteers blocked off streets and intersections and organized the floats for the march towards Western Financial Place.

“At the end of the day, we saw thousands of kids and families all just walking down Baker Street past Safeway and they all gathered at Balment Park and we watched a 12-minute fireworks show which was phenomenal,” added Heywood. “Just the round of applause that we heard from the crowd, it was a great success.”

Events like the Santa Claus Parade are ushering in a new era of festivals and events for Cranbrook, especially in terms of fireworks and their inherent wildfire risks in the summer months. Heywood said besides the wildfire risk, there are other advantages to winter fireworks as well.

“I was talking to some young moms and this is their first chance for their kids to see fireworks. Why? Because these fireworks were launched at 6 o’clock in the evening,” Heywood told MyEastKootenayNow.com. “When we do them on Canada Day you’re shooting them off at 11 o’clock and most kids are wanting to go to bed by that time.”

Cranbrook City Council made the decision in 2018 to prohibit fireworks in the summer, effectively ending the chance of a fireworks show on Canada Day. As a replacement, fireworks were instead featured at the 2019 Winter Blitzville event in downtown Cranbrook.

Heywood said fireworks can be expected at both Winter Blitzville and the Santa Claus Parade moving forward given the wildfire issue.

“The Fire Department loves us because we’re now doing fireworks in the winter, way less risk.”

All in all, Heywood believes this is the most successful Santa Claus Parade in recent memory and is excited for the future of these types of festivals and events in Cranbrook in the coming years, as they continue to provide entertainment, but also economic opportunities.

The next major event in Cranbrook is Winter Blitzville, which will be held Saturday, February 15, 2020, and will once again include fireworks and lasers, all synched up to music. Heywood said additional details about the event will be released in the coming weeks.