18 wildfires burning across the East Kootenay and Creston Valley 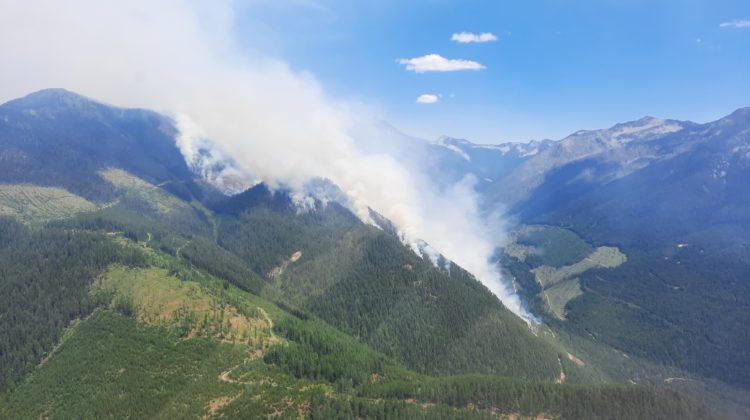 The Akokli Creek wildfire on the east side of Kootenay Lake, pictured on July 17, 2021. (Supplied by the BC Wildfire Service)

As of Monday morning, 18 wildfires are burning across the region with three Evacuation Alerts, 10 out-of-control burns and five under control.

The fire near the Bill Nye Mountain area has grown to about 784 hectares in size. The BC Wildfire Service believes the fire was caused by a lightning strike. The fire has prompted an Evacuation Alert to 53 nearby properties.

Officials with the Regional District of East Kootenay said the Alert applies for both residential properties and the Lazy Lake Recreation Sites and Trails BC Campground.

Two other Evacuation Alerts have been issued by the Regional District of Central Kootenay in response to fires on either side of Kootenay Lake.

On the east side, the communities of Boswell, Destiny Bay, and Sanca on the south arm of the lake are under one Alert. This was placed due to the largest fire in the region, an 865-hectare wildfire in the Akokli Creek area.

Meanwhile, another Alert has been placed on properties south of Next Creek and north of Midge Creek in response to a fire burning across 611 hectares of forest in the Cultus Creek area.

Out of control wildfires

Two wildfires are estimated to be about 195 hectares in size, one is near Tanglefoot Creek, southeast of the Bill Nye Mountain wildfire. The other is the Carney Creek wildfire in the Purcell Mountains.

Another 140 hectares of forest are burning out of control near Kamma Creek, southeast of Kianuko Provincial Park.

The Redding Creek wildfire is estimated to be about 131 hectares in size after it was first discovered on Sunday, July 11th.

A 42-hectare fire in the Dewar Creek area is continuing to burn out of control after it was discovered on Friday.

In the Ptarmigan Creek area, north of Whiteswan Lake, an 18-hectare fire is active and it out of control.

The smallest out-of-control wildfire as of Monday morning is a 0.01-hectare fire in the Drinkwater Creek area.

Fires being held or under control

Firefighters have gained hold of three wildfires in the region: an 11-hectare blaze near Big Lake, east of Highway 93, south of Wasa, a two-hectare fire near Sheep Creek north of Highway 3 between Creson and Salmo and a 26-hectare burn in the Granite Creek area in the Purcell Mountains.

A three-hectare fire near Centaur Lake south of Canal Flats is under control by firefighting crews.

Small fires near Gold Mountain, Maguire Mountain and Bear Creek are also under control. They are 1.31, 1.1 and 1.5 hectares respectively.