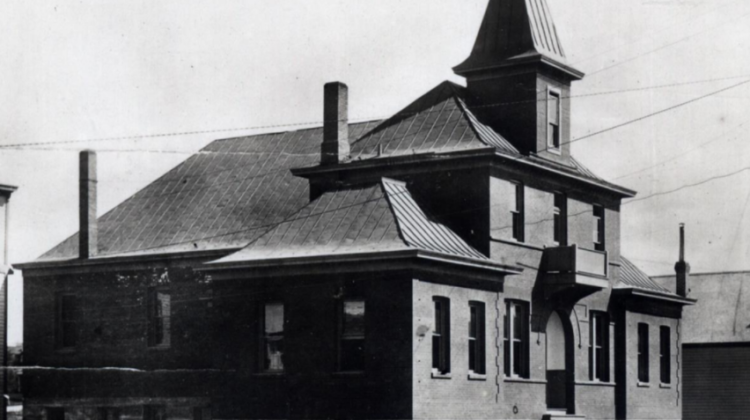 In mid-April of 1911, the first bricks were laid in the construction of Cranbrook’s City Hall, with 2021 marking the 110th anniversary of the occasion.

Plans for the building were set into motion in 1910, with a unanimous decision on what City Hall would be made of.

“Everbody wanted a brick building and no one could understand, how in the face of the enterprise shown by some of our banks, the city could refuse to put up a brick building,” said an article from the Cranbrook Herald, dated November 10, 1910.

The decision was made under Cranbrook’s third mayor Jacob Pius Fink, who also served as the community’s first Fire Chief for the volunteer Fire Brigade.

At the time, Cranbrook received a grant from the Provincial Government worth $7,000 to put towards City Hall. According to a Cranbrook Herald article dated November 24, 1910, the building cost a total of $17,775 altogether. The building itself cost $14,000, while the heating infrastructure cost $2,000. $500 was earmarked for furniture and painting, wiring, vault and cell doors and other costs came to $1,275.

Early in 1911, 125,000 bricks were commissioned from the Cranbrook Brick Company to start the building’s construction. The contract was fulfilled and the bricks were placed at the site of the future City Hall in May of 1911.

Construction officially kicked off on April 14, 1911, under local contractor George Leask. The building took about a year to finish, and the mayor, city officials, and the Cranbrook RCMP moved into their new home in 1912.

Once City Hall was completed, Cranbrook’s Norbury Avenue (now 10th Avenue) became a hub of activity for the community.

“By 1912, Norbury Avenue included the Catholic Church, Cranbrook City Hall, the Knights of Pythias Hall, the Civic Auditorium, the Canadian (York) Hotel, the Post Office and the Hanson Block (complete with housekeeping rooms, professional offices, a cigar store, a billiards parlour, a barbershop and restaurant). Along with the funeral parlour, meat market, bakery, café, movie theatre and other clothing, hardware, dry goods and grocery stores, Norbury Avenue was practically a self-contained city within a city,” said Jim Cameron, local historian, in an excerpt from his book, Cranbrook Then and Now.

The original building included a concrete basement that was used as the community’s jail and police station, it was equipped with seven cells, an office for the police chief, and a vault for keeping court records.

“The jail itself was, and is, not a pretty place. The cement block cells and hallways are cramped, windowless and void of ventilation. A small office area was accessed through a door beneath the original arched 10th Avenue entrance. Another door, added to the south side of the building at a later date, allowed for a prisoner’s entrance,” said Cameron. 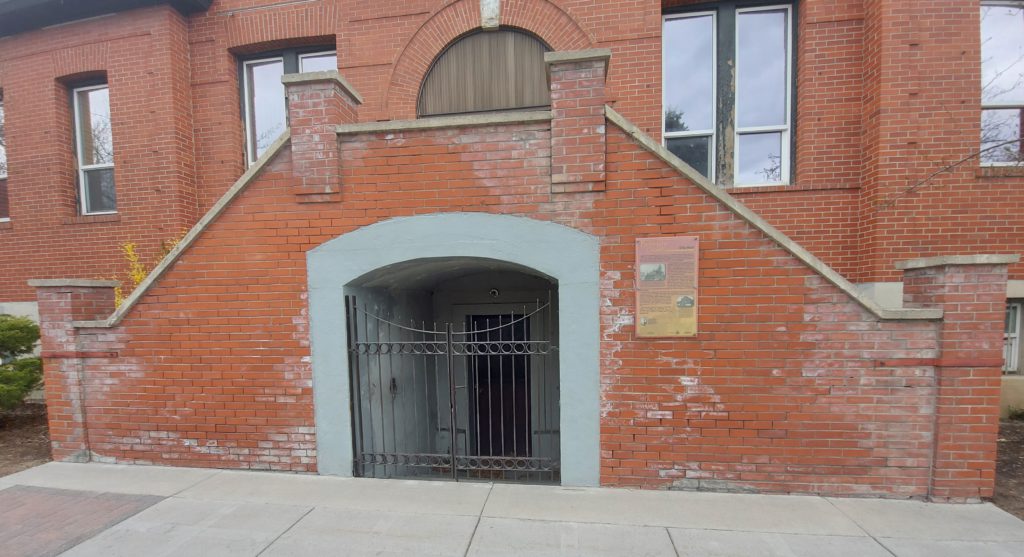 This separate entrance into Cranbrook’s jail, beneath City Hall was added in 1935. (Ryley McCormack, MyEastKootenayNow.com staff)

The jail was a grim place for its occupants, and Cameron’s book details a number of deaths that took place within its walls through its 50 years of operation.

“There have been at least four deaths in the basement of City Hall, and quite likely more,” speculated Cameron in his book. “Almost all records for the times are lost or otherwise unavailable but it is known that one male prisoner died in custody in 1920 and another in 1927.”

Today, the jail cells are used as storage, with just one retaining the original barred door as a reminder of the basement’s original purpose.

Cranbrook RCMP eventually moved out of City Hall, and into its own building in 1961.

A few years later, during the First World War, City Hall also functioned as a recruitment office, and soldiers were pictured on the steps before they were sent off to war. 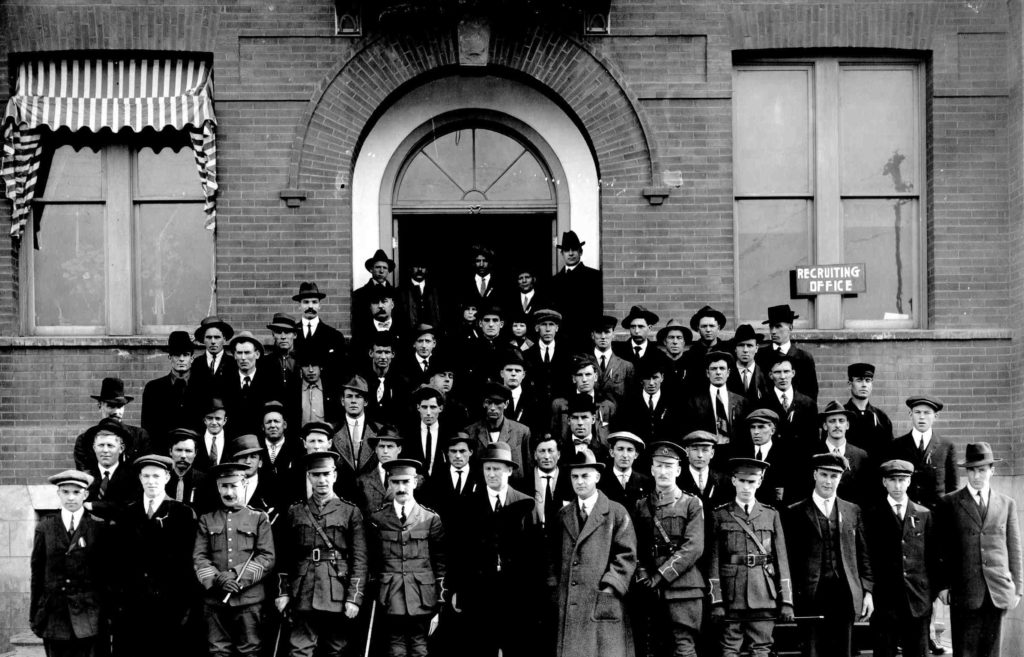 Volunteer soldiers pictured on the steps of Cranbrook City Hall before being sent off to fight in the First World War. (Supplied by the Cranbrook History Centre)

Over the years, a number of changes were made to the building to accommodate the growing city, eventually becoming what it is today. The balcony, cupola and flagpole were removed in 1931, and a separate entrance into the basement was added in 1935.

“Extensions to the north were added as the town grew and more space was needed for civic operations,” explained David Humphrey, local volunteer archivist. “The original spire, front door, and balcony have been removed over the years. On the same lot, the adjacent brick garage has been recently renovated and the exterior restored.”

In the ’60s, the historic building faces an uncertain future. According to Cameron, Cranbrook’s mayor and council felt the old City Hall was outdated and offered limited space.

Architect David Fairbanks presented a plan for a new and modern look for the building using the old structure in 1963. 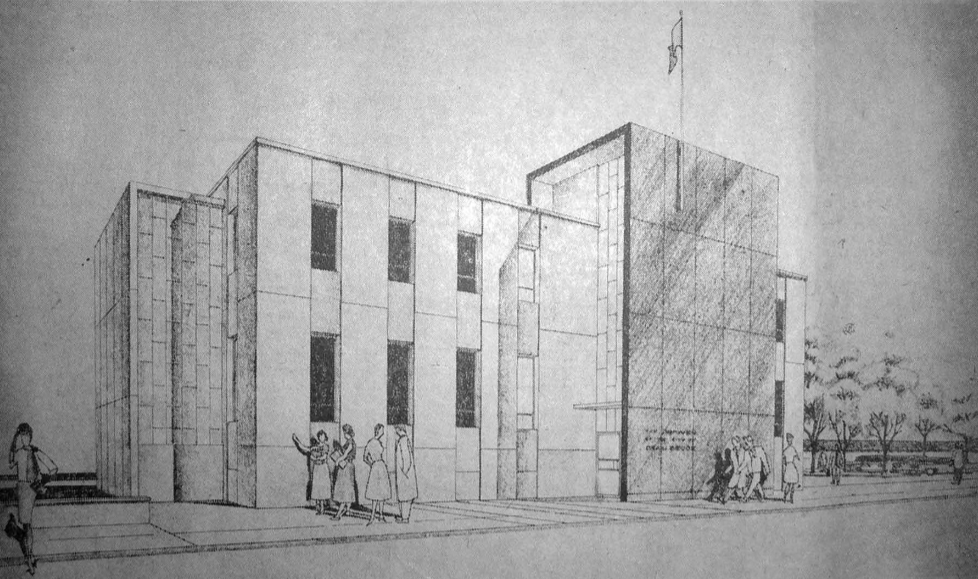 Architectural rendering of the proposed changes to Cranbrook’s City Hall in 1963. (Supplied by Jim Cameron)

“It is not a bad design for the time if you can forget about the fact that there is a heritage building somewhere under all those panels. The plan, born in the spring, grew wings during the summer and died rather peacefully by autumn. Some taxpayers felt it was too much money and others that it was unnecessary,” said Cameron. “The city solicitor could not find a loophole to avoid paying the design costs of about $10,000, but city council shelved the $150,000 project in favour of $15,000 in minor renovations.”

A large addition was built on to City Hall in 1975, which extended the building to the north and created a new entrance.

City Hall has retained its original brick exterior and entrance into the basement from the street, along with the copper-coloured metal roof. 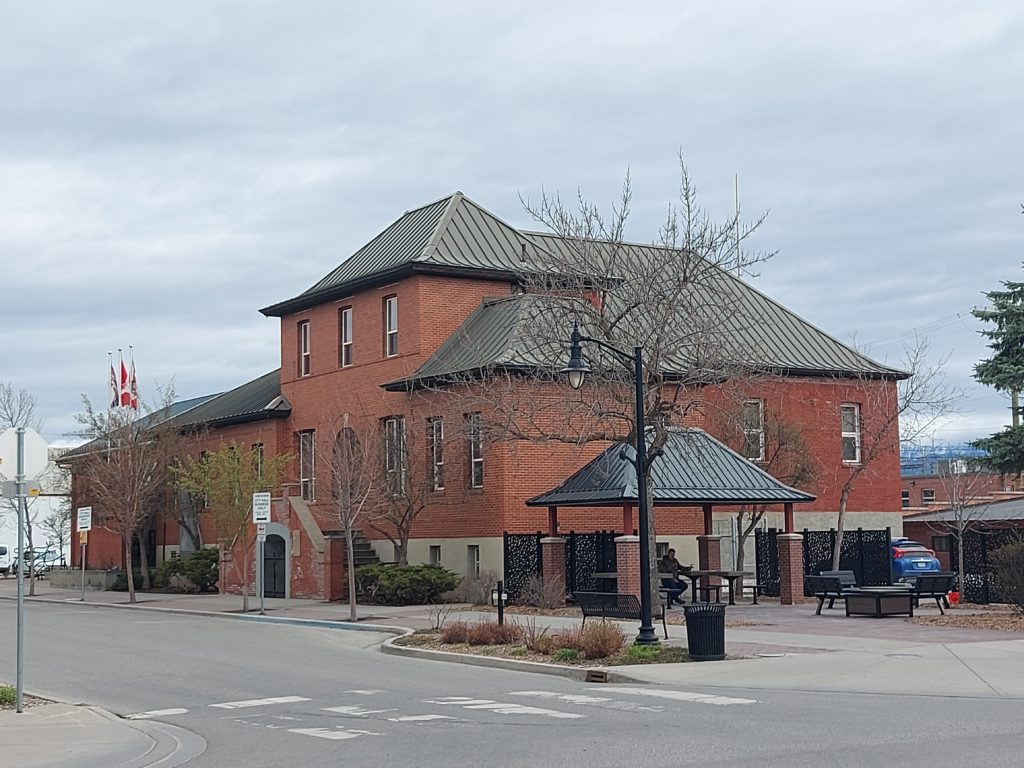