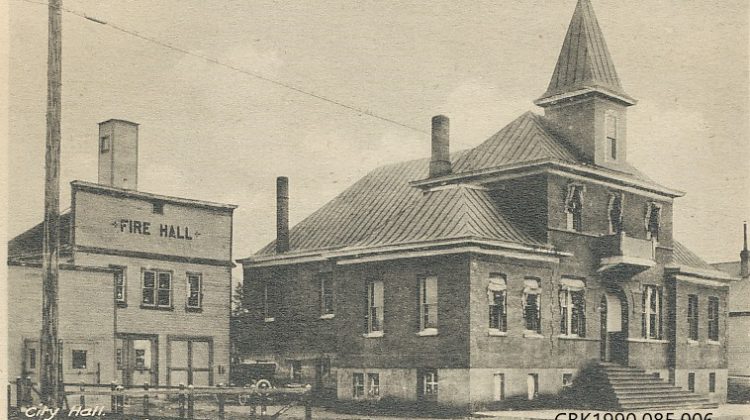 Cranbrook's second fire hall was built beside City Hall in 1911. (Supplied by the Cranbrook History Centre)

Cranbrook’s Fire Brigade had a tough start, battling fires and public apathy before they were officially established upon Cranbrook’s incorporation in 1905.

According to the Cranbrook History Centre, the first steps to getting a proper Fire Brigade in town were taken in 1899, a year after the Canadian Pacific Railway (CPR) built its line through Cranbrook. Before the steps were taken, however, fire prevention in the community was more reactive than proactive.

“If a fire broke out in Cranbrook in the late 1800s, obviously all the buildings were made of wood, it was mostly just trying to get everything wooden that was nearby the burning building out of the way to try to contain the fire,” said Nathalie Picard, Cranbrook History Centre Programming Coordinator.

Despite that approach all but guaranteeing the loss of a building, residents seemed apathetic to a formally established Fire Brigade.

After a fire, the townsfolk would agree that a firefighting team was needed, but disinterest ultimately took over.

“It seemed that the City had a very short memory, because it wouldn’t take long after these conversations about forming some sort of Fire Brigade would happen, that the interest would die out,” explained Picard.

According to the History Centre, in November of 1899, the town called a meeting to discuss fire safety measures. Another meeting followed two weeks later, where the town decided to set aside funds to purchase a fire hose, which was done by February of 1900.

“They got a 500-foot hose, but they did not manage to find a place to hook up the firehose until five months later, when they were able to organize with the CPR to connect with their water line,” said Picard. “It was a really difficult measure because every time they were trying to add things to the Fire Brigade to make it effective, there would always be a lack of resources or a lack of interest from the community.”

In May of 1900, a meeting was finally called to establish a formal Fire Brigade. The town elected Jacob Pius Fink as its first Fire Chief and Matt Rockendorf as his assistant. The two quickly put together a 12 man volunteer crew, but the lack of equipment meant they could not be properly trained.

The History Centre said a successful fundraiser helped the fledgeling Fire Brigade purchase the necessary equipment, but they lacked a place to hook up their 500-foot hose. That is until Fink spoke with CPR and gained access to their water lines and two fire hydrants were set up along Baker Street.

Even with the new hose and equipment, no training took place and the History Centre said the Fire Brigade only really existed in theory. This lack of volunteers, equipment, training and community apathy eventually led to Fink resigning in 1902. However, a few months later in March or April, a large fire broke out.

“When there was a big blaze in 1902 along Van Horne Street, they didn’t have the people necessary to put it out in a quick manner,” said Picard.

The History Centre said the fire spread to two homes and two businesses. Volunteers frantically tore down any nearby wooden structures, including outhouses and fences, while others used the hose to get the fire contained. Luckily, the early spring frost and lack of wind helped the volunteers contain the blaze before it could spread through the entire community.

Following the fire, Fink resumed his position as Fire Chief, but apathy once again won the day and the Fire Brigade was dissolved once more shortly after.

In 1904, discussions of fire safety came up again in a Cranbrook meeting following a fire that devastated Fernie’s business district. Nothing came from the meeting until a year later, when Cranbrook was officially incorporated in 1905.

“When that second Fire Hall was built, we’re starting to see the City of Cranbrook grow more and more and therefore the firefighters need more formalized training and equipment. They were able to replace their fire trucks with gasoline-fueled trucks, instead of horse-drawn wagons which they had used up until 1911,” explained Picard.

Between 1905 and 1911, firefighters were paid for each fire they put out, and were reimbursed if they came away with any burned clothing. Picard said the same pay structure remained until 1929, which is when the old Fire Hall building downtown was built and the firefighters became full-time salaried workers.

“The history of the Fire Brigade in Cranbrook is definitely one of incremental steps, moving forward two steps and moving back one. It was especially when that brick Fire Hall was built and they had motorized ambulances and trucks and full-time employees you see the Fire Department become a mainstay in Cranbrook,” said Picard.

This article was written in collaboration with the Cranbrook History Centre.