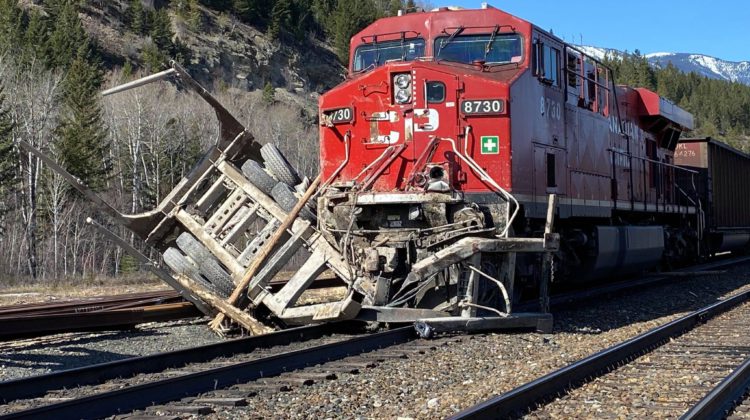 The collision between a logging truck and a CP Rail freight train on Thursday, March 18, 2021 in Canal Flats. (Supplied to MyEastKootenayNow.com)

Columbia Valley RCMP has fined the driver of the logging truck for failing to stop, following a collision with a CP Rail train on Thursday.

MyEastKootenayNow previously reported on the train collision last week, but Columbia Valley RCMP has since provided further information about the incident.

RCMP said that around 12:30 pm on Thursday, March 18th, emergency responders attended the scene of a collision between a logging truck and a Canadian Pacific Railway (CP Rail) train at the Thunderhill Road railway crossing in Canal Flats.

From their investigation, RCMP learned that the logging truck was southbound on Thunderhill Road when a southbound CP Rail train struck the back trailer of the fully-loaded truck.

“The commercial vehicle’s rear trailer separated, due to the impact of the collision and was reportedly dragged a couple hundred meters down the tracks,” stated Cpl. Jesse O’Donaghey, a spokesperson for Southeast District RCMP.

“A violation ticket was issued to the driver of the logging truck for allegedly failing to obey a stop sign,” confirmed O’Donaghey.

Speaking to MyEastKootenayNow last week, Salem Woodrow, Manager of Media Relations and Community Affairs with CP Rail said they were grateful to the emergency crews at the scene.

“CP appreciates the response from local first responders who quickly attended the incident.”

As RCMP continues to investigate, they are asking any witnesses of the crash that have not yet spoken to police to phone the Columbia Valley RCMP detachment at 250-342-9292.