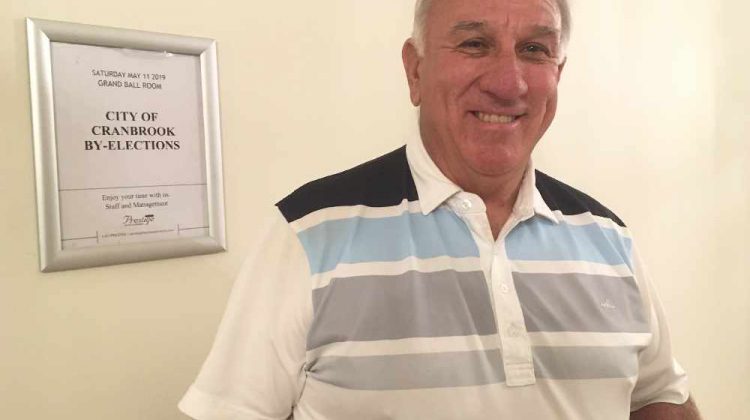 John Hudak at the Prestige Rocky Mountain Resort on General Voting Day May 11, 2019 after hearing the preliminary results from the Cranbrook Byelection. (Bradley Jones, MyEastKootenayNow.com staff)

Collecting 1,115 votes, John Hudak has been crowned the unofficial winner of the 2019 Cranbrook Byelection and is set to become the newest member of City Council once results are made official on Wednesday.

As per the preliminary results counted after polls closed at 8:00 pm on Saturday, Hudak had collected 45.9% of the total vote in the Byelection, being declared as the unofficial winner with 1,115 votes.

“This is really about me being able to put something back into the City that gave me my building blocks going forward in life,” Hudak told MyEastKootenayNow.com, minutes after hearing the results. “I’m really excited about the opportunity to be able to bring some ideas to the City and hope to be able to move us into another level.”

“I plan on being a full-time City Councillor so I want people to talk to me about their problems and I want to sit down and I want to listen and try to help them out.”

Ron Miles finished second in the race for the single City Council seat with 518 votes, while Jordan Fiorentino finished third with 428.

Here are the unofficial and preliminary voting results:

As per the preliminary results, 2,425 total ballots were cast in the Cranbrook Byelection.

Saran Press, Chief Election Officer, reported to MyEastKootenayNow.com at the polling station that voter turnout was about 16.1%, up about 1.5% from the previous 2017 Byelection.

“Very comparable to the last 2017 Byelection and down definitely from the General (Election), but that that is definitely how the byelections work,” said Press. “I’m happy with the turnout, I mean it can always be better, but we’ll just keep encouraging and trying different ways to reach voters and facilitating that vote.”

The Byelection results will be made official at 4:00 pm in Cranbrook City Council Chambers on Wednesday, May 15, 2019.