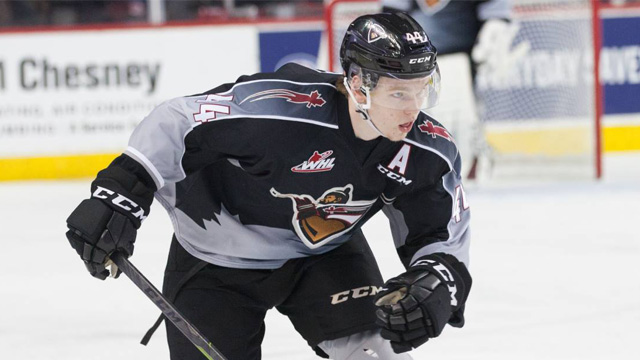 As the Colorado Avalanche prepare for the NHL’s 24-team playoff, their top rookie selection from the 2019 draft has joined the team in Denver for Phase 3.

Cranbrook’s Bowen Byram is one of 34 players invited to training camp by the Avalanche as they gear up and prepare for the NHL’s qualifying round which begins August 1st. It’s also the first time Byram has joined the Avalanche on-ice since he was taken 4th overall by Colorado in the 2019 NHL Draft.

As per NHL.com, Jared Bednar, Head Coach of the Colorado Avalanche isn’t set on his lineup for the NHL playoff.

“We haven’t made any decisions on our lineup or where guys’ slot and where they’ll play, we’ll use the whole training camp, what we’ve seen through the course of the season,” said Bednar on NHL.com. “This training camp, our exhibition game and even the round-robin and make decisions and see where we’re at come Game 1 of the playoffs, but I like what I’m seeing out of the guys day one right away.”

Speaking to NHL.com about the arrival of some Avalanche prospects including Bowen Byram and Connor Timmins, 22-year-old Avalanche blueliner Samual Girard said the future is bright for the franchise.

“I think that’s great for the Avs to have a good prospect like that coming up so that’s going to be good for us,” Girard said to NHL.com on Tuesday. “They are young, I mean they’re probably my age, but they still are good players. They’re going to be up soon so it’s good for us just to have a great future.”

Byram is one of 12 defensemen invited to training camp as part of Phase 3, while the Avalanche also have 18 forwards and four goaltenders at camp as well.

Due to the COVID-19 pandemic, the NHL is allowing teams to have 28 players and an unlimited number of goalies, while previous rules only allowed 23 total players on the roster, with 18 players and two goalies active on any given night.

It’s possible that Byram is included in the 28 players brought with the team to Edmonton for the 2020 NHL playoffs, but it could also serve as valuable ice time for the 19-year-old to get his first taste of the league before pushing for a potential roster spot this fall when the 2020/21 season begins.