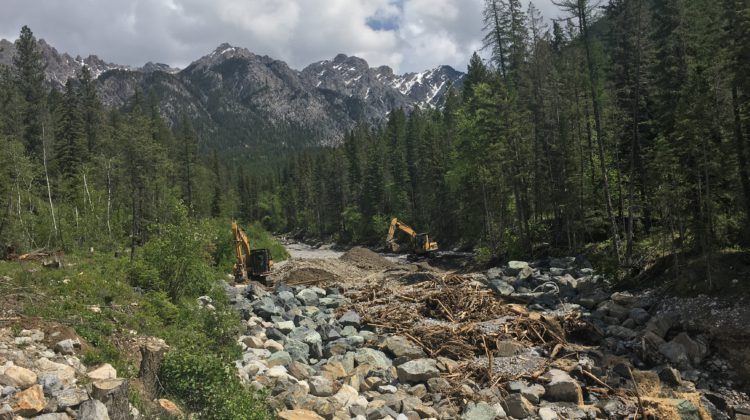 The upper debris trap on Fairmont Creek as of June 8, 2020. (Supplied by RDEK)

Heavy rainfall last week has prompted a significant clean-up by the RDEK, noting that the debris flow in Fairmont was the second-largest in recorded history for the community.

According to Brian Funke, RDEK Engineering Services Manager, an estimated 30,000 m³ of logs, rock and other debris ended up traps along Fairmont Creek and Cold Spring Creek.

“This event is roughly half the size of the 2012 debris flow and could have been catastrophic had the new debris flow mitigation measures not been in place.”

Back in 2018, a three-phase debris flow mitigation project was complete on Fairmont Creek, allowing for additional capacity. The project cost $1.94-million and was 92% funded by Emergency Management BC, 4% from Community Works Funds, and 4% from the community through the Fairmont Creek Flood and Debris Flow Control Service. The RDEK recognized that water and mud could still jump the creek banks during a large-scale flooding event, but the goal was to increase public safety by limiting the potential for debris, gravel, and large amounts of rock to end up in Fairmont Hot Springs.

“Although this isn’t the first test of the debris traps, it is certainly the most significant and the system did an incredible job of keeping the large debris away from homes and properties,” said Funke. “While we never like to see any on-the-ground impacts, and we don’t want to minimize the impact on those affected property owners, this could have been so much worse.”

The RDEK said overall impacts to Fairmont Hot Springs include mud and water on several roads and culvers, some water in basements and a garage nearby Fairmont Creek. About six properties also had mud and water in their yards, and the gold course had water intake problems due to the large debris flow. 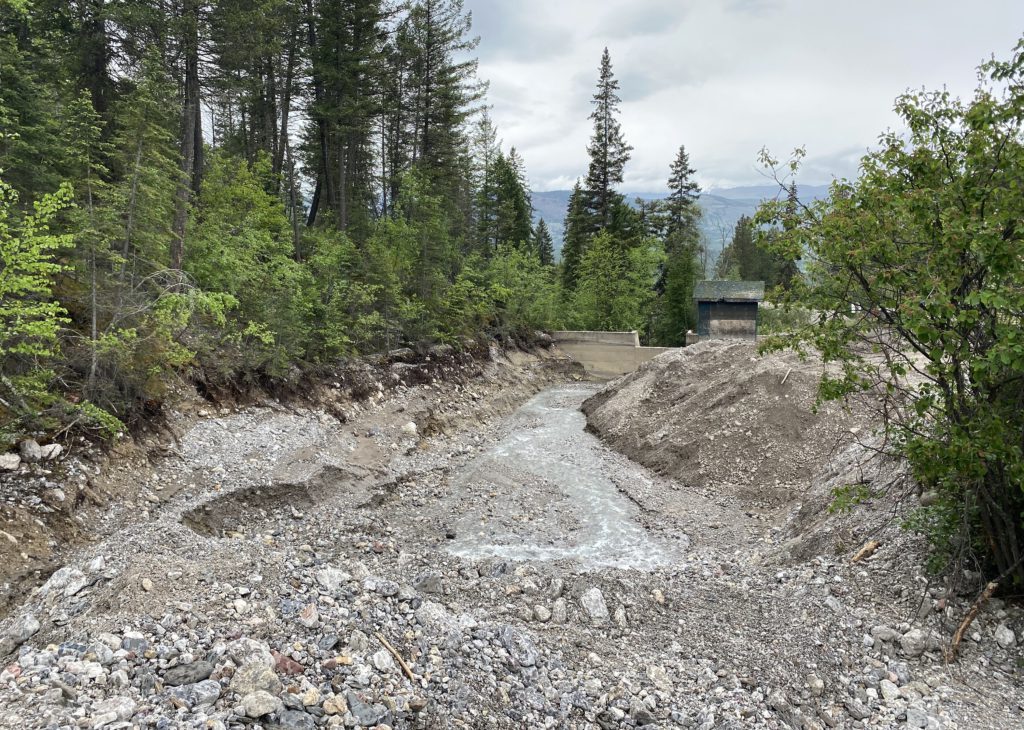 The RDEK said logs and debris have been cleared from Fairmont Creek and restored the channel, while the berm above Campground Road and at Marble Canyon has been graded. Work began last week on the golf course’s 12th hole, removing material and slowly dewatering the pond. Throughout the weekend, crews continued to remove material to create additional capacity. The uppermost debris traps on Fairmont Creek are now being worked on by the crews, and removal of debris has begun.

“Our priority is to restore as much capacity within the creeks and the debris traps as possible so that we are ready if another event were to occur,” said Funke. “Having said that, we need residents to remain aware and prepared as both creek systems are still vulnerable to flooding, particularly now during the freshet season.”

The pond debris trap on the 12th hole of of the Fairmont golf course as of June 8, 2020. (Supplied by RDEK)

Contract crews also worked over the weekend on a section of Fairmont Creek near Riverview where erosion protection and armouring were destroyed from the rainfall on May 31st.

“To help residents protect their properties, a BC Wildfire crew pre-filled approximately 1,000 sandbags Friday afternoon to help make it easier for the community to get sandbags in place proactively,” noted the RDEK. “Sandbags are located at the old barn at Mountainside golf course and on the pullout on Columbia River Road north of the creek.”

Earlier this year, the RDEK received additional funding for a Debris Flood Mitigation Project on Cold Spring Creek. Although work has not yet begun on that project, the RDEK awarded the engineering contract to McElhaney on May 29th.