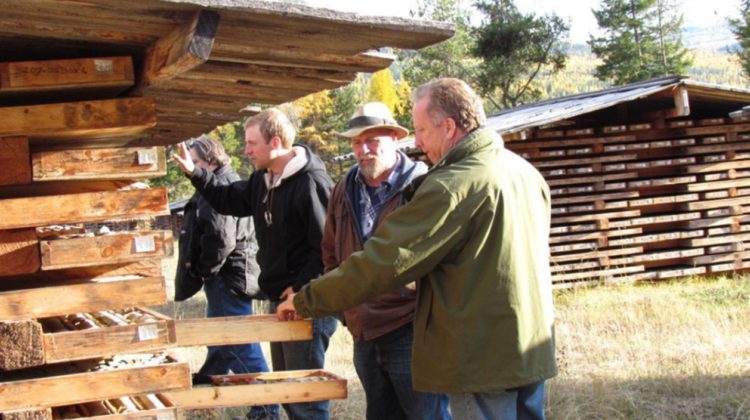 Exploration drilling compiled with historical data has uncovered an area of high-grade gold mineralization potential with concentrations of about 54 grams per ton near Cranbrook.

According to PJX Resources, the highest concentration of gold it has found on its Gold Shear Property is approximately an ounce and a half per ton. With gold trading at $2,400 an ounce, the results look promising.

“That’s really high grade, many places around the world are mining gold in the grams, like one or two grams, even less in some places. Those are bigger deposits in a wider zone, or you get a narrow zone, like we have, that are only a couple of meters, but they’re high grade,” said John Keating, president of PJX Resources. “It’s a really good indicator of its potential, it’s probably one of the best in the whole region.”

Placer gold, or gold that has been deposited in sediment along creek or river beds, has been found nearby, which kicked off a gold rush in the 1860s, Keating said that nobody has found the source of that gold yet.

According to Keating, no work has been done in the area of the Gold Shear Property since it was discovered in the 1990s, and with this latest sample, more exploration is on the horizon.

“We’ve found some really high-grade gold mineralization over about a meter width. It’s a narrow width, but it’s very high in gold content. That’s where we’ve focused and we’ve drilled and we’ve been able to follow that down for over 100 meters.”

The exploration being done by PJX Resources is attempting to find openings or folds in the bedrock where gold and other valuable minerals such as zinc, lead or silver may be found.

“What we need to do is now find out where that system has opened up and become bigger as its folding. At depth, the lower we’ve been drilling, we’ve found a geophysical anomaly,” explained Keating. “We believe that’s where we’ll find a possible break in the rock or an opening or a fold, and maybe that’s where it is. It may also be on strike, which means that it’s horizontal, in that it’s going along the ground in one direction or the other direction, that’s where it may be as well. The next phase we want to do is start testing that content, but at least with what we’ve found we believe we’re getting closer.’

Keating added that he believes that if future findings yield similar results, the Gold Shear Property and several others have the potential to become another mine similar to the Sullivan mine in Kimberley that operated for 92 years, and closed in 2001.

“When you find one base metal deposits, usually there are others around. Why hasn’t anyone ever found one? We’ve been working to understand that as well. We have a couple of properties, our Vine Property, which is south of Cranbrook, and our DD Property, which is to the south-west,” Keating said to MyEastKootenayNow.com. “Both of those properties are looking very promising, in one of the holes we drilled last year, was probably one of the first times outside of the Sulivan Basin that a similar type of rock has been found, so that requires more drilling as well.”

The next step for PJX Resources in the East Kootenay is to continue with its exploration and mapping of the area to see if more gold or other minerals can be found.

“At this point in time, what we want to do is discover a deposit, drill it to prove that it’s got the potential to be a mine, and probably parter with someone to actually put it into production,” concluded Keating. 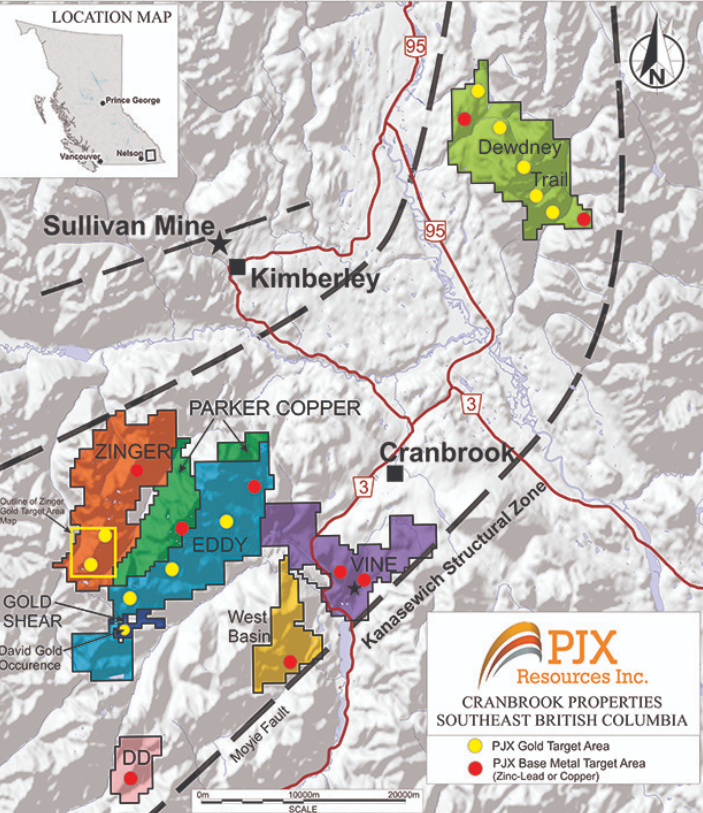 A map depicting where the Gold Shear Property is in relation to Cranbrook and Kimberley. (Supplied by PJX Resources)