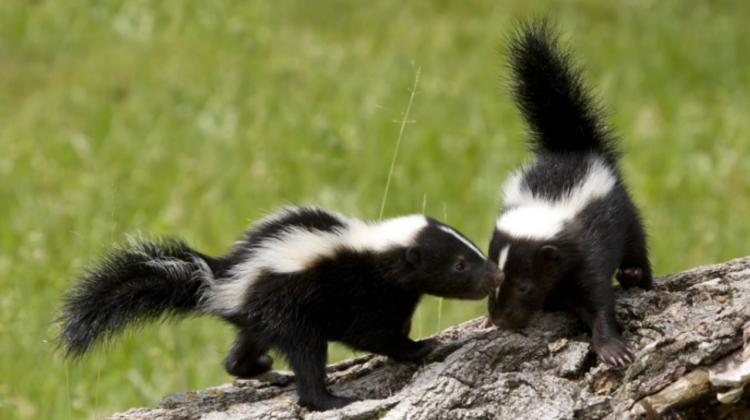 A pair of skunks. (Supplied by WildSafeBC)

WildSafeBC has shared some advice on how to avoid conflicts with skunks, which are strong diggers that can cause damage to lawns and gardens in their search for a meal, they may also leave a pungent aroma in their wake.

As with many other animals, WildSafeBC advises people to manage attractants on their property, such as bird feeders and garbage. Securing any pet doors at night and feeding pets indoors is also advisable.

“Make your yard uninviting to skunks, you can do that through the use of motion activated sprinklers and even lights. While this won’t deter a motivated skunk, it might be enough to move it along if it’s the first visit to your property,” said Danica Roussy, community coordinator for WildSafeBC Kimberley and Cranbrook. “They are omnivores and skilled diggers, so a lawn with a fresh set of small holes dug in it may indicate that a skunk hunting for larvae or even beetles that live underground has been around.”

WildSafe said that skunks rarely dig out their own dens, preferring to use already existing holes made by other animals or gaps under a porch or building.

To prevent a skunk from making its home on your property, it is recommended that all of the potential denning sites are sealed off. WildSafeBC said, however, covering any holes should be avoided between May and August, as young skunks may become trapped while their mother is foraging.

While skunks don’t necessarily pose much of a physical threat to humans and animals, they can leave an unpleasant smell that lingers in the area for quite some time.

“Skunks spray as a means of defence only, so the best way to avoid getting sprayed is to avoid scaring skunks. There’s a couple of things skunks will do to warn of an impending spray. So, what they’re going to do is hiss, they’ll stamp their feet, they’ll rise up on their front feet and arch their back in a ‘U’ shape, at that point, you’re going to want to retreat as far back as possible,” explained Roussy.

Roussy added that the animals are most active at dust and dawn, so people should check their property before leaving pets out at night.

According to Roussy, skunks have tested positive for rabies, but there has not been any recorded cases of skunk-transmitted rabies within B.C.

As well, WildSafeBC said that children should be thought to stay away from wildlife, as they may get injured, or in the case of a skunk, sprayed.

Any run-ins with wildlife, including skunks, may be reported to the Conservation Officers Service RAPP line.