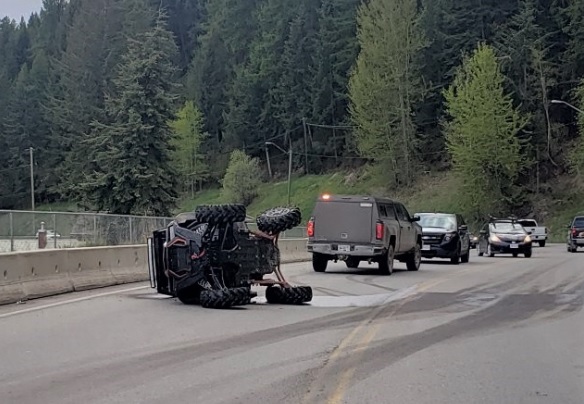 The flipped UTV on Kimbelrey's Warren Avenue on Tuesday, May 19, 2020. (Supplied by Kimberley RCMP)

Kimberley RCMP said a flipped Utility Task Vehicle (UTV) on Warren Avenue just past 5:00 pm on Tuesday, March 19th was the result of an impaired driver.

“The driver was apprehended and the officer noted signs of alcohol consumption,” said RCMP. “The breath demand was read and the driver subsequently received a 90-day driving prohibition.”

Police impounded the UTV for 30 days as well.

RCMP said the driver was also given violation tickets for not having a driver’s licence or insurance, and for not wearing a seat belt.

“The driver did not sustain any serious injuries,” noted police. “East Kootenay Traffic Services is conducting the investigation.”

RCMP first got the report of the UTV earlier in the afternoon but was not able to locate the vehicle on the road until it flipped.

CVSAR and STARS Respond to Incident on Johnstone Trail

Local Community Foundations to Provide More Than $140,000 For COVID-19 Relief