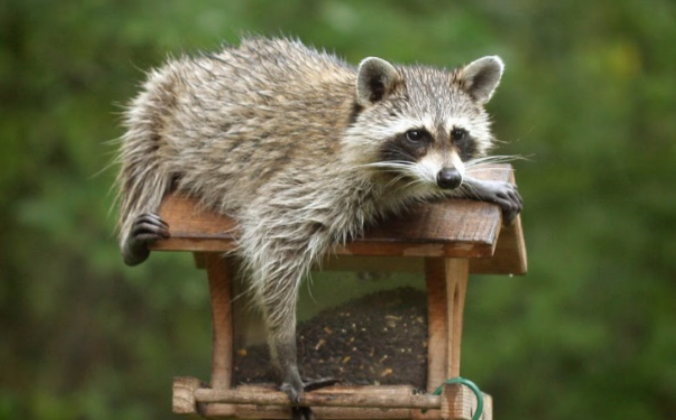 A raccoon on a bird feeder. (Supplied by WildSafeBC)

Raccoons, an animal that is nocturnal and typically shy, can become accustomed to living in an urban environment and cause problems for people by harming them and their pets and damaging property, they have also been known to infiltrate human homes and trash bins to steal an easy meal.

Safety tips regarding the animals and keeping them away from your home have been offered by WildSafeBC.

When introduced to an urban environment, raccoons can become bolder as they learn to associate humans with an easy food source.

Raccoons can also become quite aggressive if they are cornered or handled, and the best approach is to scare the animal away.

“Given their small size, they don’t pose a serious threat, but they are capable of inflicting minor injuries. If you are approached by a raccoon, scare it away by yelling, you can also clap and make noise,” explained Danica Roussy, Community Coordinator for WildSafeBC Kimberley and Cranbrook. “Of course, keep your pets inside if you know there is one around, In particular, cats and small dogs can be seriously injured, or even killed in conflicts with raccoons.”

There are several dangers associated with raccoons, and WildSafeBC said they may carry a type of parasite that can live in humans.

“They can sometimes carry a dangerous parasitic roundworm that can be transferred to humans through contact with fecal matter. If you’re cleaning an area where raccoons have frequented, make sure to wear a mask, goggles, and some gloves,” said Roussy.

On rare occasions, they have been known to be carriers of rabies, which can infect other animals and people.

WildSafeBC advises that people make their homes and properties as unappealing to the animals as possible and refrain from feeding them to try reducing the number of run-ins with raccoons and other wildlife.

“Keep all your garbage secure, feed your pets indoors, take your birdfeeders down, especially during the evenings, or until winter if you’d prefer, keep your pet doors locked at night if you have one. You want to prevent them from denning inside your house or around outside buildings, so you’ll want to seal up any holes or potential entrances. This is best done before March or after August, just because you could be separating family units.”

WildSafeBC said that any run-ins with wildlife, including raccoons, can be reported on the Conservation Officers Service RAPP line.

CVSAR and STARS Respond to Incident on Johnstone Trail

Local Community Foundations to Provide More Than $140,000 For COVID-19 Relief