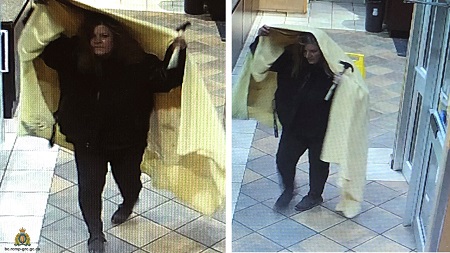 Surveillance images which show the female suspect of the Dairy Queen robbery in Invermere on February 12, 2020. (Supplied by Columbia Valley RCMP)

Columbia Valley RCMP is looking to identify a suspect captured on video surveillance, in relation to a robbery at the Invermere Dairy Queen on Wednesday.

Just after 8:00 pm on Wednesday, February 12, 2020, Columbia Valley RCMP received word that someone had robbed the Invermere Dairy Queen. RCMP learned that the suspect was a lone woman that had entered the restaurant with a hammer and demanded cash from staff

“That suspect exited from the restaurant, with an undisclosed amount of currency, to a nearby location where she entered into a small passenger car and fled the area,” said Cpl. Jesse O’Donaghey, spokesperson for the RCMP Southeast District. “The employees are being offered support by RCMP Victim Services. Thankfully no one was injured during this incident.”

Surveillance images from the Dairy Queen captured the unknown woman, who is considered to be the RCMP’s primary suspect.

Police describe the woman as being about 50 to 55 years old with long blonde hair and a medium to heavy build. RCMP said the woman was last seen wearing dark clothing with dark running shoes while wrapping herself in a yellow blanket and carrying a hammer.