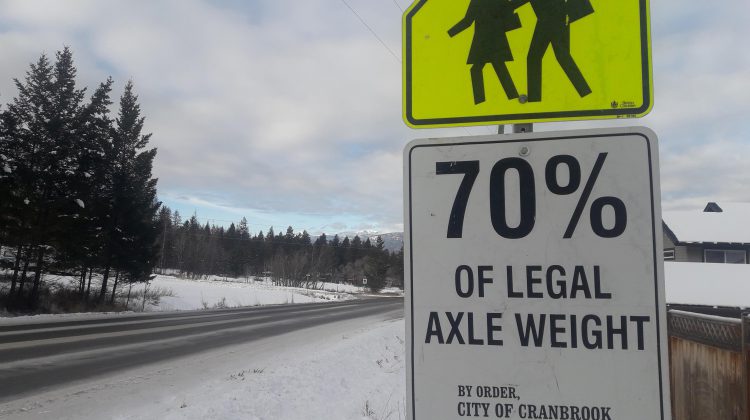 Load Restriction Signage. (Supplied by the City of Cranbrook)

Due to the early warming weather, the City of Cranbrook has implemented load restrictions to try and curb road damage that occurs as winter frost thaws.

The City said the restrictions are in place as of Wednesday, and all streets in Cranbrook are limited to 70% of  Legal Axle Loading and other streets are set at 50% on a case-by-case basis. It adds that signage will be in place to notify drivers.

According to the City, it is working with the Ministry of Transportation and Infrastructure, which issues restriction load notices based on frost depth and temperatures in a given location. It added that Cranbrook intends to align its streets with the same restrictions to allow access to the City from industrial or construction sites outside of the City limits.

“When the frost first comes out of the ground the soils underneath the pavement become very saturated and unstable, which can quickly lead to significant pavement damage and unsafe road conditions from heavy loads. We’ve had this occur a few times over the past several years and want to be as proactive as possible to protect our roads,” says Mike Matejka, Manager of Infrastructure.

The City added that applications can be made for overload or oversize permits on a single load basis, but it is not intended for continuous industrial use.