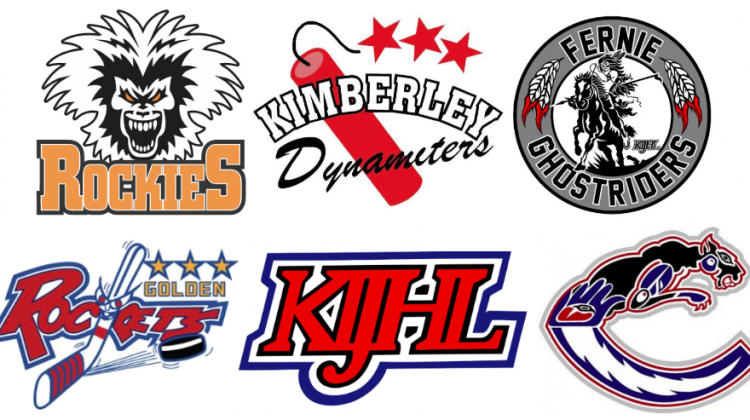 The Kimberley Dynamiters clinched the Kootenay Conference and the Golden Rockets playoff hopes are still alive following a busy weekend in the KIJHL’s Eddie Mountain Division.

Kimberley recently secured the Eddie Mountain Division title and although they split their pair of games this past weekend, the Dynamiters have now secured the Kootenay Conference title. The Dynamiters were on a two-game road trip this past weekend, crushing the Grand Forks Border Bruins 7-1 on Friday before losing 5-4 in overtime to the Spokane Braves. Kimberley outshot Grand Forks 40-22 while five Dynamiters had two-point games including Beau Larson and Keegan McDowell who both scored a pair of goals in the win. Against Spokane, Kimberley outshot the Braves 58-53 as Brock Palmer (2G, 1A) led the team with three points while Keegan McDowell (1G, 1A) had two points. Although Jett Saharchuk tied the game for the Dynamiters late in the third period, Spokane’s Kade Levins scored the game-winner for the Braves in the first overtime period. The Dynamiters now have four games remaining on their regular season, playing all of those games at the Kimberley Civic Centre. The team hosts the Columbia Valley Rockies at 7:00 pm on Friday and the Spokane Braves at 2:00 pm on Sunday.

The Fernie Ghostriders had an earlier weekend than normal, playing their two games on Thursday and Friday. In Grand Forks Thursday evening, the Ghostriders battled to a 4-4 tie with the Border Bruins. Greg Susinksi (3A) led the Ghostriders while Dylan Defosse (2G) and Gavin Lawrie (2A) also had multi-point evenings. Coming off the tie, Fernie travelled to Castlegar on Friday for a meeting with the Rebels. The Ghostriders got back in the win column with a 5-3 victory over the Rebels despite being outshot 48-33. Alaister (2G, 1A) was the team leader in the win while Ethan Fitzgerald was strong between the pipes, stopping 45 pucks to post a .938 SV%. With four games left on their regular season schedule, the Ghostriders will split time at home and on the road this upcoming weekend. The Ghostriders will host the Spokane Braves at 7:30 pm on Friday from Fernie Memorial Arena, before hitting the road on Saturday for a 7:00 pm meeting at Eddie Mountain Memorial Arena in Invermere against the Columbia Valley Rockies.

Locking up a playoff berth last week, the Columbia Valley Rockies dropped both of their matchups this weekend, snapping their three-game winning streak. Taking on the Golden Rockets Friday evening, the Rockies fell 4-3 on the road at Golden Arena. Although Columbia Valley would tie the game 3-3 in the early in the third period, the Rockets would score the game-winner later in the period to take the 4-3 win away from the Rockies. Jonathan Milligan led Columbia Valley with two assists in the loss. Returning to Invermere’s Eddie Mountain Memorial Arena on Saturday, the Rockies dropped a 2-1 decision in overtime to the Kelowna Chiefs. Erik Lloyd scored the lone goal for Columbia Valley in the first period, before the Chiefs tied the game late in the third and scored the game-winner in the second overtime. Bretton Park made 44 saves in the loss as the Rockies were outshot 46-32. Columbia Valley will now battle their Eddie Mountain Division rivals this upcoming weekend, as the team has just four games remaining in their regular season. The Rockies travel to Kimberley Friday to take on the Dynamiters at 7:00 pm from the Civic Centre before a 7:00 pm meeting with the Fernie Ghostriders back at Invermere’s Eddie Mountain Memorial at 7:00 pm on Saturday.

The Creston Valley Thunder Cats earned just one of a possible four points this past weekend, keeping the Golden Rockets’ playoff hopes alive, as the Thunder Cats fell 9-3 to the Kelowna Chiefs on Friday before tying the Beaver Valley Nitehawks 3-3 on Saturday. With a single victory, Creston secures the fourth and final playoff spot in the Eddie Mountain Division. The Thunder Cats were crushed by Kelowna on Friday at Johnny Bucyk Arena as the team was outshot 40-28. Kelowna exploded in the opening period, scoring five goals to take take a commanding 5-2 lead after 20 minutes and then cruising to the 9-3 victory as Blain Worthing scored four goals for the Chiefs while Benjamin Kruse had two goals for Creston in the loss. Looking to rebound from the blowout loss, the Thunder Cats skated to a 3-3 draw with the Nitehawks in Fruitvale. Brian Butland (2G) led the club while Andrew Clark (2A) and Corbin Cockerill (2A) also finished the game with two points. The Thunder Cats have ample opportunities to lock up the final playoff spot in the Eddie Mountain Division, needing just a single point in their six remaining games. Creston can secure that playoff berth with a win, tie or overtime loss on Thursday in Grand Forks against the Border Bruins, Friday evening in Nelson versus the Leafs, or at home on Saturday at Johnny Bucyk Arena against the Castlegar Rebels at 7:30 pm.

The Golden Rockets playoff hopes are dangling by a thread, as the team will need to win their four remaining games in the KIJHL regular season while the Creston Valley Thunder Cats will have to drop their next six games in regulation. Golden kept those hopes alive by splitting their weekend matches with the Columbia Valley Rockies and Kelowna Chiefs. Hosting the Rockies on Friday from Golden Arena, the Rockets skated to a 4-3 victory. Jaden Callan scored the game-winning goal for Golden in the latter half of the third period as eight players found the scoresheet while Brandon Weare stopped 35 of 38 shots. On Sunday, Golden gave themselves no room for error by losing 5-1 to the Kelowna Chiefs. Golden was outshot 41-30 in the loss as Jackson Wade opened the game’s scoring but wouldn’t find the back of the net the rest of the night. The Rockets are now in a tough spot with four games remaining as they will need to win out and get some help, needing the Thunder Cats to drop their six remaining games without earning a single point. Golden hosts the Spokane Braves at 7:30 pm on Saturday before a key matchup on Tuesday against Creston.