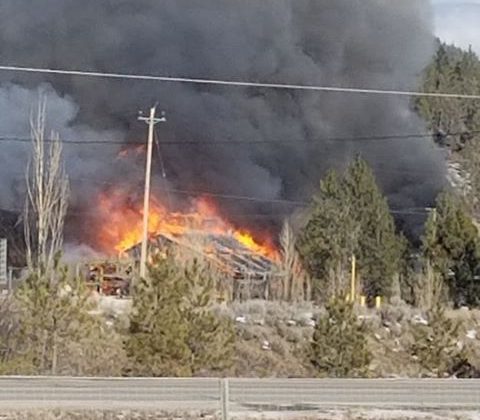 A fire consuming one of the buildings at the Former Canfor sawmill in Canal Flats. (Supplied by Lisa Evans)

The RDEK said that trucks and equipment from both the District of Invermere and Fairmont fire departments were able to contain the blaze to a single building, which was being used for manufacturing.

According to the RDEK, the fire is now under control but it will take several days to fully extinguish. Crews will remain on the scene to extinguish any remaining hot spots.

ORIGINAL STORY (3:24 p.m.): A fire has broken out at one of the buildings at the former Canfor sawmill in Canal Flats.

Fire crews are on the scene working to contain the flames.

It is currently unknown if any injuries have come from the incident or what caused the blaze.