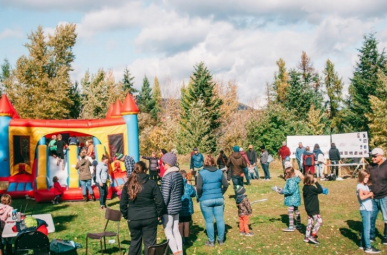 An engagement event on October 5, 2019. (Supplied by the City of Kimberley)

Park Coordinators appeared before Kimberley City Council to present an opportunity for grants to help make a proposed all-ages gathering space a reality.

The idea for the park is to make a unique gathering space for all members of the community.

“There are several different playgrounds, but they seem to be for certain age brackets perhaps. It has been identified by different groups and individuals that maybe we need something a little different besides a metal and plastic play structure,” said Todd Larsen, one of the Park Coordinators.

In an appeal to City Council Monday night, a grant application was brought forward that would add a further $75,000 to $100,000 in funding to the park which the City would have to apply for.

“We’ve found that there’s a great opportunity with the Columbia Basin Trust’s community outdoor revitalization grant, and the City would need to be a proponent on that,” explained Larsen. “Hopefully this is something that would fit into their strategic plan and vision for the recreation plan for the city.”

The plan for the park includes a multitude of items, including a gazebo, music garden, amphitheatre, a log forest for climbing and water features.

“We’ve consulted with a variety of experts and there’s a lot of research that’s been done, focusing on physical literacy,” Larsen said to MyEastKootenayNow.com. “This means just encouraging people to play and structuring that so that it’s easier and more accessible for people to just get out and do that.”

The proposed park would be built alongside Kimberley’s Swan Avenue near the existing basketball court with intent to be used by the community at large.

“It’s not just a play space but also a community gathering place which I think is important,” said Larsen. “It’s in a great location between downtown and some of the trail corridors that we have in Kimberley and some of the residential areas as well.”

Larsen added that hopes are up for the construction of the park to be started this year, pending on the available funding for the project.

“There’s a number of opportunities coming down over the winter and spring here that we’re planning to apply for and beyond that, we’ve also received a lot of in-kind contributions and opportunities for volunteers,” explained Larsen. “we’re optimistic that we’ll be breaking ground in May or June and get it done by the fall or possibly next spring in 2021.” 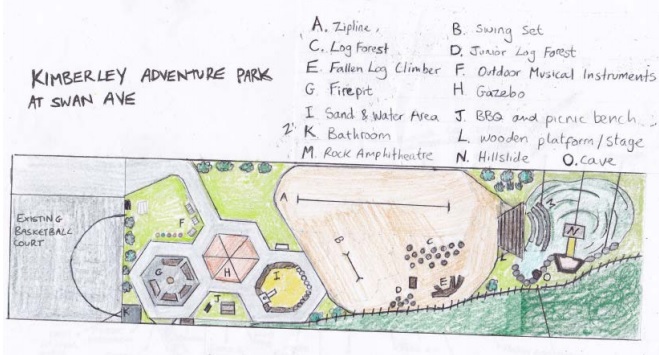 A sketch of the proposed Swan Avenue park. (Supplied by the City of Kimberley)