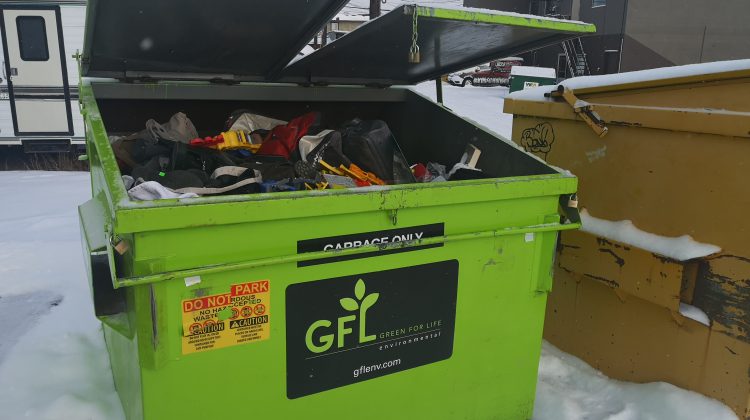 A recent string of thefts from Cranbrook’s Hospital Auxiliary Thrift Shop has prompted the store to ask members of the public drop off donations during its open hours.

According to Odette Rouse, Vice President of the Hospital Auxilliary, donations have been stolen from outside, leaving a mess for volunteers to clean up.

“They steal it from our garbage bins, which they cut the lock off of. They’re also damaging our donation bin, they go inside and they steal the donations. Whatever they don’t steal they leave there on the ground, then it freezes to the ground and we have to pick it up,” said Rouse. “There’s a printing building right on First and 8th Avenue; they had them on camera bringing the bags all the way there because they’re a little bit more hidden. They take whatever they want and damage the rest, so we cannot use it anymore.”

Rouse added that the thieves have reportedly urinated on some of the items they don’t take, making them unusable by the thrift store. Rouse also said that in her 38 years of working with the Hospital Auxilliary, thefts are higher now than she has ever seen before.

“We are having a really hard time right now. We just hope for the best, we hope that people will support us,” said Rouse.

Funds made from the Auxiliary Thrift Store are used to help the East Kootenay Regional Hospital cover costs and buy new gear.

“We buy equipment for the hospital at the rate of about half a million dollars a year,” Rouse said to MyEastKootenayNow.com. “We really want to make sure that our business keeps on going, it’s helping everybody in the community.”

Currently, the Hospital Auxiliary has partnered with another local business to build new bins to help prevent further thefts.

“We have a volunteer that was designing exactly what we wanted, and Fabrite agreed to make whatever was necessary. They stepped in and said it would cost a lot less if they do it for us,” explained Rouse. “I think they’ll be very good to us.”

Rouse also expressed concerns for the safety of thrift store volunteers and the thieves themselves, urging the public to refrain from taking action on their behalf.

“I don’t know how these people feel or what they’re thinking. I certainly don’t want to hurt them, but I don’t want any of my people to get hurt either,” said Rouse. “To me, it’s very important that all of our volunteers feel safe and good about coming there.”

In the meantime, Rouse has asked for the public to drop off donations during their open hours, Tuesday to Saturday from 9:30 a.m. to 4:30 p.m.

“Please bring your donations during the day to help us when we are working,” said Rouse. “We will fix the problem with our bins, we’ll get something better so people that work during the day have a chance to come at night to give their donation.”

Rouse said that video surveillance footage has been given to the police for them to investigate.