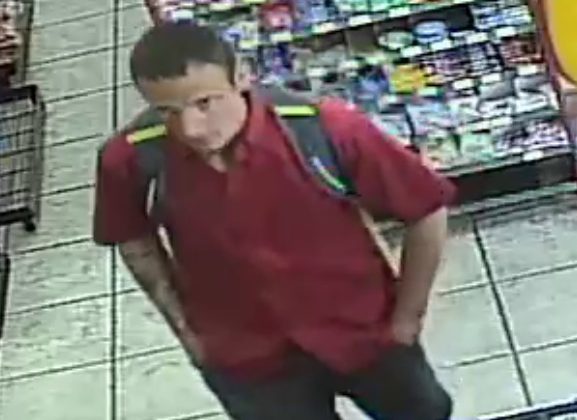 The alleged theft suspect on July 15, 2019 that used the stolen credit card captured on video surveillance. (Supplied by Cranbrook RCMP)

Cranbrook RCMP is investigating and looking to identify a suspect that allegedly broke into two vehicles and stole credit cards earlier this week.

Police were first notified that a man’s wallet had been stolen from his vehicle sometime in the afternoon on Monday, July 15, 2019.

“His vehicle had been parked at the Tamarack Centre when an unknown person entered the vehicle and took his wallet,” said Cranbrook RCMP. “At approximately 2:40 pm a credit card belonging to the male was used at a local gas station.”

RCMP said the credit card was declined and that the man that used the card left it behind when he left the store.

“A second vehicle was broken into around this time and a credit card was used at another local convenience store,” added RCMP. “The same male was identified as a suspect in this theft as well.”

Receiving video surveillance from the gas station, RCMP were able to get a picture of the man that allegedly used the stolen credit card.

At this time, RCMP are asking the public to help identify the man. Anyone with information or details is asked to contact Cranbrook RCMP at 250-489-3471.