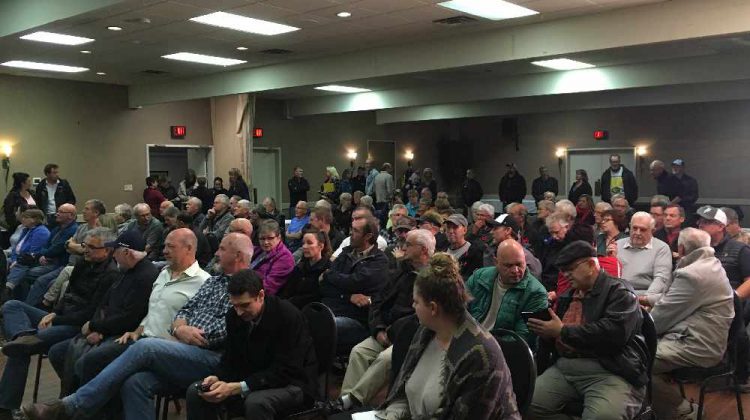 Concerned Cranbrook residents and Kootenay ICE supporters attended a Town Hall Meeting on Thursday to discuss what the community can do to support the WHL team amidst rumours that they could relocate to Winnipeg if they don’t garner more fan support.

Hosting the Town Hall meeting Thursday at Cranbrook’s Heritage Inn, the Kootenay ICE Green Bay Committee gathered local stakeholders to open discussion about their Reach Out Campaign to secure 500 new season tickets by November 9, 2018, and how they can boost ticket sales to show Cranbrook’s support of the WHL franchise.

“It was a positive day for our community, I think when the ICE review what happened today, I think it’s a really good sign moving forward,” said Allan Rella, Chair of the Kootenay ICE Green Bay Committee following the Town Hall meeting. “I think today was another big day in starting the energy going the right way.”

Rella spoke passionately about Ed Chynoweth’s belief in small market teams in the WHL, which is why the team originally came to Cranbrook in 1998 from Edmonton, only taking five days to sell out the Memorial Arena for two full seasons, and eventually constructing what is now Western Financial Place as the long-time home of the ICE.

“For a community that can build a RecPlex, attract a team from Edmonton, the task of getting another five to six hundred season tickets is doable,” Rella told reporters. “We have a specific plan to increase attendance which I think every team in this league is wanting to do and I think we’re going to be looked at as a role model.”

Besides Rella, the Town Hall also saw statements and speeches from John Hudak, the Green Bay Committee’s Marketing Manager; Lee Pratt, Mayor of Cranbrook; Jason Wheeldon; a prominent Cranbrook resident; and Tom Shypitka, who had his statement read by Wheeldon.

Shypitka, MLA for Kootenay East, providing a video prior to Thursday’s meeting and challenging the community to support the Kootenay ICE:

The Kootenay ICE were not in attendance Thursday and had no official representation at the Town Hall Meeting.

Pratt told those in attendance Thursday that economic impact the Kootenay ICE bring to Cranbrook and the community every year is in the realm of $5 million to $7 million, noting that the corporate members have been great but that the team need’s people in the seats to be sustainable.

“The attendance is down and they need more people in the stands, it’s as simple as that, it’s a business,” Pratt told MyEastKootenayNow.com. “Most businesses operate, they have to get a return on their investment, and obviously with the fan support they’re getting right now, it’s not a viable operation so they’ve got to look for some long-term sustainability and that’s what they’re doing.”

Seeing those in attendance at Thursday’s meeting Pratt and Rella both believe the community has spoken but that action is needed.

“The people are interested and we just have to get them up and get some people out in the stands,” said Pratt.

“This community wants this team to stay here,” added Rella.

Pratt told reporters that the City of Cranbrook remains committed to the Kootenay ICE franchise and keeping them in Cranbrook despite recent reports in the Winnipeg Free Press that indicate otherwise.

“We made that commitment a number of years ago and we’re standing by that commitment,” said Pratt. “We’re working with them on a weekly basis, we’re trying to do with them what we can to ensure that they are here.”

The Kootenay ICE and the City of Cranbrook currently have a signed lease through to 2023. Pratt said the City offered to become a partner and re-negotiate parts of the lease once the ICE were purchased by the new ownership group including Greg Fettes and Matt Cockell in 2017, but that the re-negotiations never happened. The Mayor told the meeting that he believes the Kootenay ICE and the City of Cranbrook have one of the best lease agreements in the entire CHL and that the City is doing everything in their power to support the franchise.

Although the Kootenay ICE Green Bay Committee has officially launched their Reach Out Season Ticket Program and will discuss further at their meeting again next week, Rella said that’s just Phase 1 of their plan to boost ticket sales. The Reach Out Program is where the Committee finds sponsors for Kootenay ICE tickets that would then be given to kids and others who may not have an opportunity to see an ICE game and allowing them to attend free of charge. Rell said Phase 2 will be rolled out in the coming weeks, which will include pro-rated season tickets.

“The secret is the number, if you get the fan support then there’s no reason for the ICE to leave here,” added Pratt. “The Board of Governors, you can’t hold their feet to the fire and tell somebody, no you can’t move, because if you’re losing money they’re not going to force you to stay here and go bankrupt. That’s kind of a false feeling that the Board of Governors won’t support it, they’re all in the same game, the Board of Governors, they all have ownership and they’re going to vote for what’s right for the individual owner.”

Ron Robison, WHL Commissioner provided a statement to MyEastKootenayNow.com following reports that the Kootenay ICE could be looking at a move to Winnipeg.

“The WHL Commissioner continues to monitor the situation in Kootenay very closely and reports to the Board of Governors as required on any new developments,” said an excerpt of the statement. “The discussions which take place on WHL franchises are internal and will remain confidential. With respect to the Kootenay ICE franchise, there is nothing new to report at this time.”

The Kootenay ICE have not directly addressed the reports or the Green Bay Committee’s efforts to boost season seats, telling MyEastKootenayNow.com earlier this week that “no comment will be given,” in regards to the relocation rumours.

The Green Bay Committee will be back next Thursday to further discuss Phase 1 of their Kootenay ICE Season Ticket Campaign, as those looking to purchase tickets from the group can contact John Hudak, Marketing Manager by email at johnnyhudak1@gmail.com or by phone at 250-489-9646.

Although the Committee is making their own push, the Kootenay ICE are offering season tickets at prorated prices up until November 1, 2018. That link can be found here.