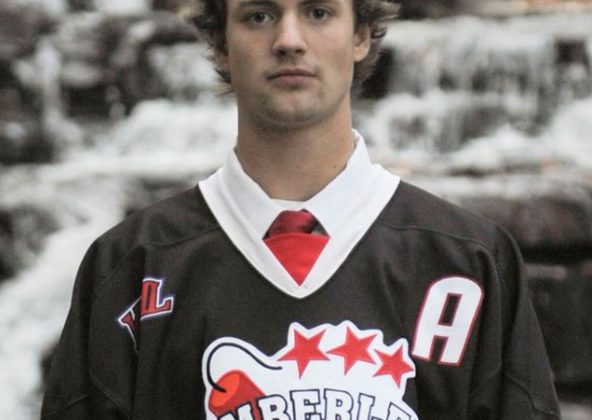 The Kimberley Dynamiters’ Brock Palmer continues to lead the KIJHL in scoring this season, and it isn’t even close, as the 20-year-old is also approaching 200 career points.

The Coaldale, Alberta native collected nine points (3G, 6A) in Kimberley’s three victories last week over the Golden Rockets, Beaver Valley Nitehawks and Columbia Valley Rockies to be crowned the KIJHL’s first star. Palmer’s nine points now pushes his season total to 59 points (28G, 31A) in just 24 games, which is an astounding 19 points ahead of Kelowna’s Kayson Gallant (20G, 20A) and Nelson’s Reid Wilson (16G, 24A), who are both tied for second in league scoring.

Speaking to KIJHL Media, Palmer said he’s happy with his play but that improvements can always be made.

“I am happy with my play, but need to make a few minor adjustments to be completely satisfied before playoffs begin,” Palmer told KIJHL Media. “I thought me and my line (Piva and Saharchuk) played very well and it was awesome for our line to get rolling.”

Palmer collected five of his nine points in last Tuesday’s 5-3 victory over the Golden Rockets where he netted a hat-trick and added two assists. On Friday, Palmer grabbed three assists in the Dynamiters’ 6-1 victory over the Beaver Valley Nitehawks and added one more helper in the team’s 5-3 win at the Civic Centre on Saturday against Columbia Valley.

Winning a KIJHL Championship with Kimberley in 2018, Palmer was also named the KIJHL Rookie of the Year that same season.

Palmer is nearing a major milestone, amassing 198 points (80G, 118A) in 116 games so far in his KIJHL career, the 20-year-old could surpass 200 points when the Dynamiters open their three-game road trip on Thursday against the 100 Mile House Wranglers.