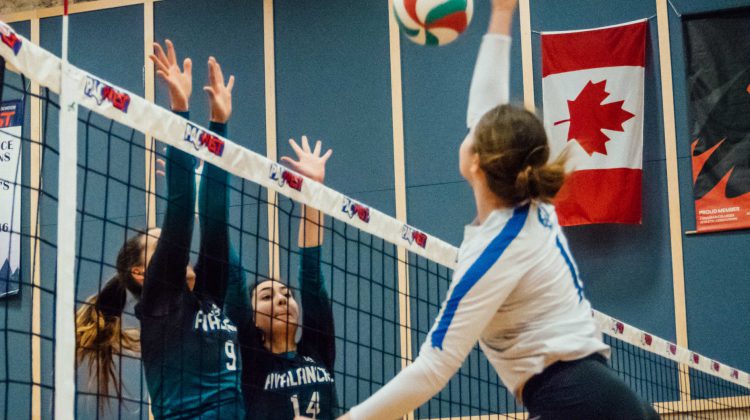 Taylor Whittall and Claire Sheppard of the College of the Rockies Avalanche blocking at the net. (Bradley Jones, MyEastKootenayNow.com staff)

The College of the Rockies Avalanche went head-to-head with Capilano University this past weekend, as the Men’s and Women’s Volleyball teams saught to defend home court against the Blues.

After starting their season 0-2 with losses to Douglas College (1-3, 1-3), the Men’s Avalanche pushed their record to 2-4 last weekend against the Columbia Bible College Bearcats (3-1, 1-3) and the University of Fraser Valley Cascades (0-3, 3-2) in Abbotsford. Hoping to get back to .500 against the Capilano University Blues, the Avalanche would drop both of their matches at College of the Rockies.

On Friday, the Men would fall 3-1 as Gustavo Bertoli (11 kills, 9 digs) and Caleb Peters (11 kills) would lead the Avalanche attack. Bertoli would collect 11 kills again on Saturday for the Avs, but they would once again fall to the Blues, losing in straight sets.

2-6 to start the PACWEST season, the Men’s Avalanche are sixth out of seven schools in the Conference, just ahead of the 1-5 CBC Bearcats.

The Avalanche travel to Vancouver Island this week, first matching up with the Vancouver Island University Mariners in Nanaimo on Thursday and Friday before another doubleheader on Saturday and Sunday in Victoria against the Camosun College Chargers.

The Women’s Avalanche opened the PACWEST season on a great note, defeating Douglas College (3-2, 3-2) while their record settled at 3-3 after their four matches in Abbotsford against the Columbia Bible College Bearcats (3-1, 1-3) and the University of Fraser Valley Cascades (1-3, 1-3). Looking to improve upon their record, the Avalanche would instead remain at .500 following their pair of matches at College of the Rockies against Capilano University.

The Blues would take the first match against the Avalanche on Friday, as they took a 3-1 victory. In the loss, Taylor Whittall (16 kills, 11 digs) led the Avalanche alongside Ecaterina Arabadji (7 kills, 17 digs) and Megan Clark (12 digs).

On Saturday, the Avalanche would bounce back with a thrilling five-set victory. While the Blues would take the opening set, the Avs would take sets two and three before losing 25-23 in the fourth set to force the deciding fifth, where the Avalanche would edge Capilano 17-15 to claim the 3-2 win. Whittall (19 kills, 11 digs) was once again electric for the Avalanche, although Arabadji (16 kills, 18 digs) and Clark (21 digs) also had very strong games for College of the Rockies, pushing their record back to 4-4.

Sitting fourth in the PACWEST, the Avalanche have a tough test this week in Nanaimo and Victoria as they take on the Vancouver Island University Mariners (8-0) Thursday and Friday before Saturday and Sunday’s matches against the Camosun College Chargers (4-3).