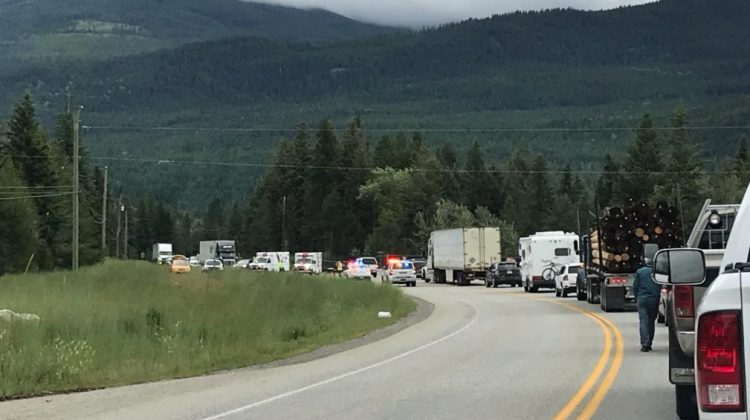 RCMP East Kootenay Traffic Services confirmed to MyEastKootenayNow.com that one person was killed and another seriously injured after a motorcycle collided with a boat trailer on Highway 3 north of Moyie Wednesday afternoon.

“An eastbound truck pulling a boat trailer made a left-hand turn in front of a westbound motorcycle. There was obviously not enough room to complete the turn safely and the motorcycle collided with the boat on the trailer,” said Erichsen. “As a result of the collision, one 47-year-old female lost her life and the male driver of the motorcycle is in Cranbrook Hospital with serious injuries.”

The collision was about 11 kilometres north of Moyie on Highway 3 at Monroe Lake Road near Moyie Lake Provincial Park.

Despite original reports of multiple fatalities, Erichsen told MyEastKootenayNow.com that only one motorcycle was involved in the collision and only one person was killed.

“There is only one fatality at this time, the matter is continuing to be investigated,” said Erichsen. “Just one motorcycle, two people. There was a second motorcycle that witnessed the accident.”

Drive BC reported Highway 3 was fully closed around 5:15 pm on Wednesday, partially opened to single lane alternating traffic around 7:51 pm and then fully opened to traffic at about 1:16 am on Thursday.