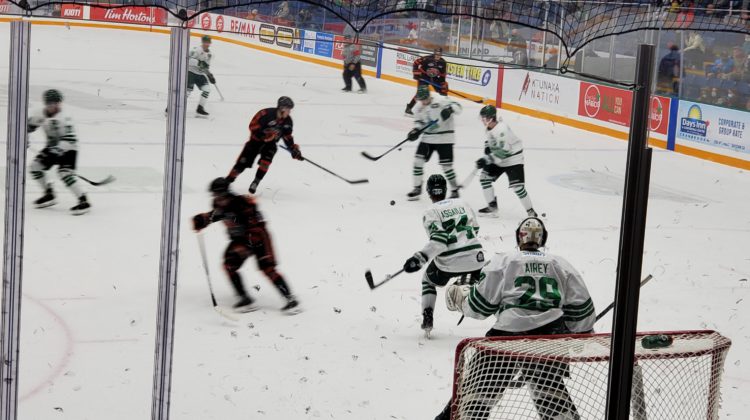 On October 22nd and 23rd, the Cranbrook Bucks will face the Powell River Kings and the Cowichan Valley Capitals during the BC Hockey League’s annual Showcase.

“It’s an exciting weekend for our players, it’s our annual showcase for the BCHL. It draws a lot of attention to all the teams in our league,” added Donald.

“It’s good to see some different opponents in a different environment and give scouts an opportunity to watch a lot of players in our league in a short window.”

The showcase is always a great chance for players to show what they can do in front of NCAA and NHL scouts.

Donald said they need to treat it like it’s a normal game, but it’s an exciting weekend for the team.

“It’s a good opportunity for them, but we’re going to treat them like a staff and as an organization like it’s any other game we’d be playing throughout the season,” added Donald.

“Obviously there is a little bit more of an emphasis on it from the players’ perspective. It tends to be an opportunity for them to really show what they are as players.”

Bob and Don Murdoch, hockey legends in Cranbrook said it’s great having such high talent hockey back in the community.

“It’s really good to see any kind of hockey back here and especially to have it at this level,” added Bob Murdoch.

“Donnie and I were just talking about how impressed we were with the coaching. I think the level of coaching you have at this league, it makes it exciting, it makes it a good hockey game to watch.”

Don Murdoch used to be an NHL scout for the Tampa Bay Lightning and New York Rangers and said the BC Hockey League was always the first Tier II league to watch.

“Even when I was scouting in the NHL the BC Junior Hockey League was the number one league for tier II and that’s where most of the college players come out of,” said Don Murdoch.

“I think in the last few years they’ve had three or four guys get drafted in the first round in the NHL. It just tells you how great the BC Junior Hockey League is. I’m so happy to have them here in Cranbrook.”

BCHL officials said over 100 scouts representing NHL and NCAA teams will be in attendance.

Steven Cocker, BCHL Deputy Commissioner said they are happy fans will be able to attend even if it’s capped at 50 per cent capacity.

“The chance to get our fans back into our buildings again and put on a show for them is so important,” said Cocker.

“They have been so loyal to their teams and to the league over the past 17 months, so we are thrilled to be able to reward them.”

The Bucks will be playing Powell River on October 22nd and Cowichan on the 23rd, two matchups Donald said will be tough but a good opportunity.

“I think every game in this league is tough, it’s a great league top to bottom. It’s a good opportunity for us to see some out-of-conference opponents with Powell River and Cowichan,” said Donald.

“We’re all trying to find our identities early on in the season, two weekends in and I think the dust is starting to settle.”

“Two opponents we’re not going to see a whole lot over the course of the regular season, so it’s a chance to play some new faces and a different style of play.”

The Cranbrook Bucks’ next home game will be on October 30th against the Nanaimo Clippers.