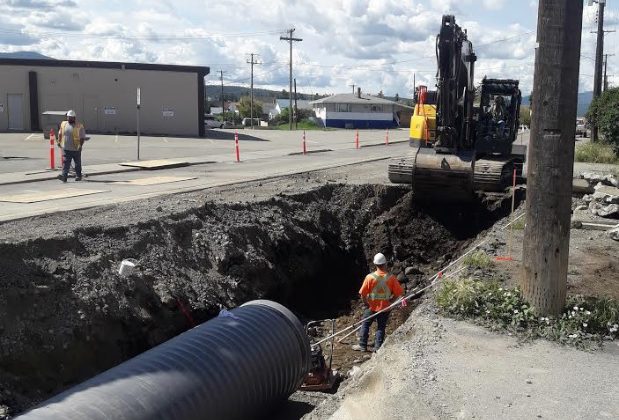 Crews with Mackay Contracting working on the storm trunk upgrade project on Kootenay Street on Monday July 15, 2019. (Supplied by City of Cranbrook)

The 2019 Capital Roads Program in Cranbrook continues to move forward as several larger projects and programs are now underway around the city, from paving to road and water main reconstructions.

The Kootenay Street Storm Trunk Upgrade began on July 9th and is expected to be completed by the end of August. Mackay Contracting is doing a full rebuild and resurfacing of the road between 4th and 5th Street North, completely closing off Kootenay Street to all traffic.

“Significant efforts are being put into minimizing the impact on local property owners and on BC Transit,” said the City of Cranbrook. “Detour routes can be used on Highway 3 or 16th Avenue North via 2nd, 4th or 6th Street North.”

Meanwhile, BA Blacktop is beginning concrete work this week as part of the annual Paving Program, as the actually paving is expected to get underway in early August.

“This project will see sections of several local and arterial roads resurfaced along with new sections of sidewalk installed throughout the City,” said the City of Cranbrook.

The Sanitary Sewer Relining Program is also coming online as part of the 2019 Capital Roads Program.

“Several major repairs have already been completed to allow for CIPP (Cured in Place Pipe) re-lining to happen. Major flushing and camera works are also underway to finalize the overall project scope and cost.”

The City of Cranbrook said the re-lining contractor should mobilize in August, continuing work through September.

“One block of water main and services is now complete and in process of commissioning,” said the City of Cranbrook of the15th Avenue South project. “The second block of water main reconstruction is currently in progress with substantial completion targeted for the end of July.”

The 8th Avenue South and 13th Avenue South Road and Water Main Reconstructions are nearly complete as all of the necessary paving and sidewalk work are now finished, while crews now look to restore walkways and landscaping before formally wrapping up those projects.

“The City would again like to thank the public and affected property owners for their patience and understanding as the work progresses.”