CRANBROOK IS HOME TO A COUPLE OF NATIONAL PICKLEBOARD CHAMPIONS!

A group of local Pickleball players recently traveled to Red Deer Alberta to attend Pickleball Canada Nationals Championship. The tournament was held from August 10-15th 2021 the competition begins with singles then moves into ladies doubles, men’s doubles and mixed doubles. The players are ranked prior to entering tournament play, which allows for competitive play within ones development level. Players are ranked from levels of 1-5, allowing for novice play in the beginning, intermediate play as players develop and advanced for skilled athletes. Some of our local athletes performed incredibly well and brought home some hardware. Canda Kennelly and Lisa Stechly competed in the Women’s Doubles 3.5 (age group 17-49) they were successful in some challenging games, and the experience became real when they were on the top of the podium and realized they had won Gold! They were not the only local players to grace the podium, Dennis Hockley brought home Gold in the Men’s Doubles 3.0 (age group 70+) and Silver in Men’s Single 3.0 (age group 65+)
Our local Pickleball community continues to grow and they are incredibly welcoming and even offer free lessons. The courts are beautiful and well maintained and they encourage new players to join, but also offer a drop-in, if you have curiosity for the game.
The sport of Pickleball is exploding as it continues to gather momentum, it unites all ages and all levels of development, people are out moving and creating connections that will last a lifetime. 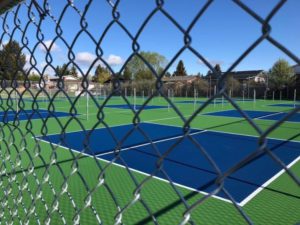