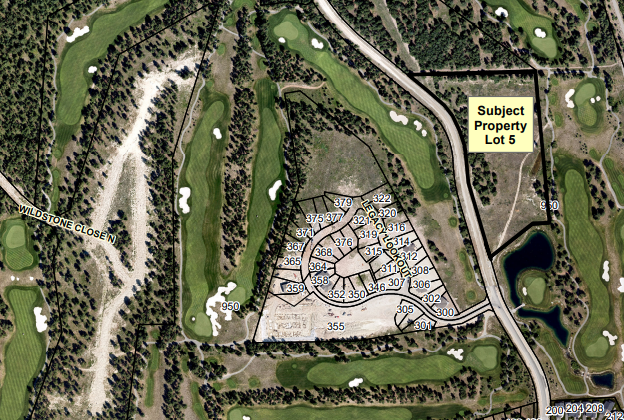 A map highlighting the area of the Wildstone development where the proposed apartment complex would have been. (Supplied by the City of Cranbrook.

Cranbrook City Council voted down an amendment that would allow the construction of an apartment building with twice as many dwelling units in the Wildstone development.

Crowne Pacific Development Corporation proposed to rezone the lot, which would allow the original 102 dwelling unit complex to expand to a 237 unit rental apartment building.

In Monday night’s meeting, Council considered a number of submissions from residents through a public hearing, along with letters. According to Councillor John Hudak, over 100 letters of opposition were sent in against the changes.

“102 units to 237 units is a significant increase – about 132%. The present OCP (Official Community Plan) allows for 102 units, whether they be apartments, condos or townhouses, and I feel that reflects the needs of our community,” said Hudak.

Councillor Ron Popoff spoke of his thoughts on the proposed development, echoing a sentiment shared by several other council members.

“I believe the Wildstone neighbourhood is maybe not the best location. Rather, high-density units are better-located downtown or near downtown, where there is immediate access to our amenities and services. More downtown density will also contribute to our downtown vibrancy,” said Popoff.

Meanwhile, Councillor Mike Peabody, who voted in favour of the amendment, mentioned the need for housing the community. Peabody said the future potential for the area’s development could bring in a number of opportunities to the city.

“We definitely need more rentals, and I think there’s a market for high-end rentals that this developer is wanting to build in Cranbrook,” said Peabody. “For me personally, I see Wildstone as our Kimberley Ski Hill, where you can have a good mix of high-income housing and a good mix of rental properties, and maybe you can even have some high-end hotels down the road.”

Mayor Lee Pratt was the only other member of City Council who voted for changing the OCP to allow the proposed apartment.

While this motion was voted down, Council gave the green light to the first reading of another proposal for a 71-unit apartment complex along 4th Street North.

The proposed construction from West Urban Developments Ltd. will be up for public consultation at a later date.