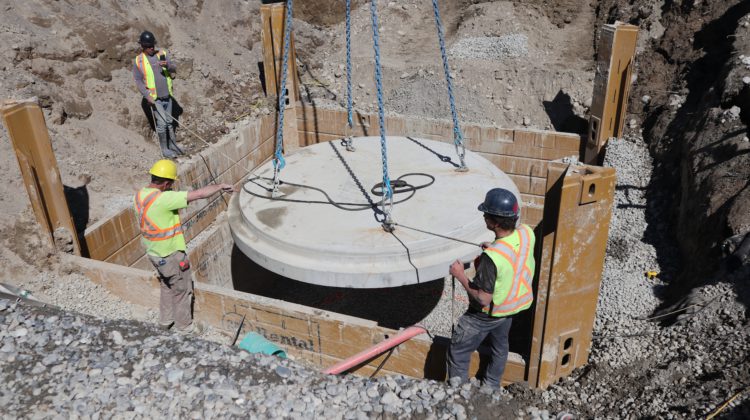 Mackay Contracting installing a Stormcepter treatment unit as part of the Broadstreet Properties development project on Innes Avenue. (Supplied by City of Cranbrook)

Major construction projects are underway in Cranbrook, and the city said they are moving ahead on schedule.

City officials said the more significant projects going on around the community include the Lagoon and Influent Trunk Main, remediation in Mount Royal, and a full rebuild of Innes Avenue. Crews are also working away at the annual paving program, a rebuild of 2A Avenue South, and work in the Wildstone area.

Work on the Innes Avenue water and sewer upgrades is about halfway done, while road work is underway from 11th Street South to Jostad Avenue.

“Some issues were encountered with the existing infrastructure, leading to some additional time and cost to complete necessary repairs prior to road building. However, the project remains on budget overall with targeted completion in September,” said City of Cranbrook officials.

Meanwhile, remediation work in the Mount Royal area is tentatively scheduled for the end of the month. The project is meant to address issues with road and water infrastructure in high priority sections of Mount Royal Drive, Mount Royal Ridge, and Mount Royal Peak. The $1.15-million contract was awarded to BAD Ventures.

Construction on the Lagoon and Influent Trunk Main project along Ridgeview Road is underway as well, work is slated to be wrapped up over the coming weeks.

Work to tie the sewage line into existing lines across the highway will be completed later this summer.

The lagoon upgrades will be a significant, multi-year project. The City said staff are working on a way to mitigate the smell and sludge issues this summer while preparing for future construction projects.

“It is great to see all of these projects progressing so well. Thank you to our staff and all of the contractors performing this work,” said Mayor Lee Pratt. “Council and I are very pleased to see this great work happening.”

According to the city, the total construction value across the six projects up to the end of June is approximately $2.2-million.