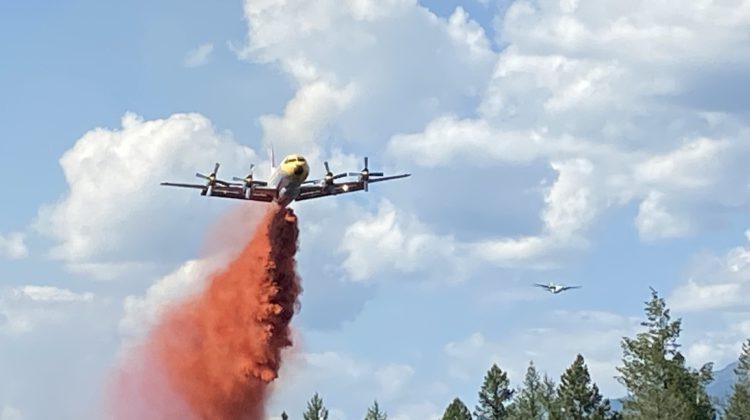 An airplane dropping red fire retardant on a wildfire in the Galloway area. (Supplied by the RDEK)

The Evacuation Order placed on Caithness Mobile Home Park in the Galloway area has been lifted.

Firefighters from the Elko and Jaffray Fire Departments responded to the 1.1-hectare fire alongside members of the BC Wildfire Service.

“The evacuation order has been lifted and the fire is now classified as Being Held,” said Information Officer Loree Duczek. “We would like to extend our thanks to the Emergency Support Services volunteers that were there for the residents today.”

An emergency Support Services reception centre was set up in Elko’s Community Hall, where 35 people checked in.

“The members of our South Country Fire Departments and the BC Wildfire Service crews, who’ve responded by ground and air today, hit this fire hard and have done an extraordinary job in controlling this situation. We are so thankful for their tireless work,” said Duczek.

The Regional District of East Kootenay (RDEK) is continuing its response to an evacuation of Caithness Mobile Home Park in the Galloway area.

The RDEK has set up an Emergency Support Services (ESS) Reception Centre at the Elko Community Hall in response to a wildfire.

“A total of 46 homes were evacuated this afternoon and evacuees are asked to register at the ESS Reception Centre,” said RDEK Information Officer Loree Duczek.

The fire is estimated to be about 0.5 hectares in size, and is burning along the rail line near Highway 3. Drivers are asked to avoid the area.

“If you need to travel through this corridor, we ask that you keep moving to avoid traffic congestion and keep the area as clear as possible for the responders,” said Duczek.

15 firefighters from Elko and Jaffray have responded with eight pieces of apparatus. Members of the BC Wildfire Service deployed an initial attack crew supported by both helicopters and airplanes.

“We are grateful to the members of our South Country Fire Departments and the BC Wildfire Service crews, who’ve responded by ground and air today,” said Duczek.

The Regional District of East Kootenay said an evacuation of the Caithness Mobile Home Park is currently underway in the Galloway area.

RDEK officials said it is due to a wildfire along the railway tracks.

According to BC Wildfire Services, the fire is approximately 0.5 hectares in size.

RDEK South Country Fire Services, BC Wildfire crews and resources are on the scene.

The RDEK is in the process of setting up an ESS Reception Centre.

More details will be provided when they become available.