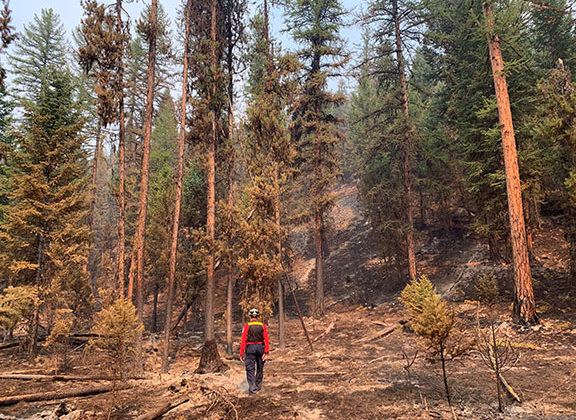 A firefighter standing amongst burnt trees caused by the Doctor Creek Wildfire on Wednesday, August 26, 2020. (Supplied by BC Wildfire Service)

Nine wildfires are active across the East Kootenay as of Sunday, July 4th, with five considered out of control.

The largest fire was discovered on Saturday, and is burning in Purcell Wilderness Conservancy Provincial Park. The lightning-caused fire is about 40 hectares in size as of Sunday afternoon.

The next largest is a 19-hectare out-of-control fire burning along Moyie River, about 17 kilometres west of Lumberton. The cause of the fire is still unknown after it was discovered on Friday.

A small wildfire was sparked by a lightning strike near Fairmont Hot Springs. While the fire is close to the community, it is 0.01 hectares in size as of Sunday afternoon after its discovery the day before.

East of Fairmont, another fire is burning on the east side of Fairmont Mountain. It was discovered on Saturday and is about 0.01 hectare as of Sunday afternoon.

North of Canal Flats, a five-hectare blaze caused by a lightning strike is burning in the Dry Creek North area. It is considered out of control at the time of writing.

North of there, a lightning-caused wildfire is out of control in the Bear Creek area, west of the Kootenay River. The fire is 1.2 hectares in size after it was discovered on Friday.

A wildfire in the Bootleg area west of Kimberley is now under control. The fire grew to 0.36 hectares before it was contained by firefighters. The fire was caused by a lightning strike and was discovered on Thursday.

Two fires are active close to one another along Redding Creek approximately 23 kilometres southeast of Crawford Bay. Both fires were caused by lightning and were discovered on Friday. They are considered out of control and are 0.8 and 0.04 hectares in size.

As of Sunday, 176 wildfires are active across the province.