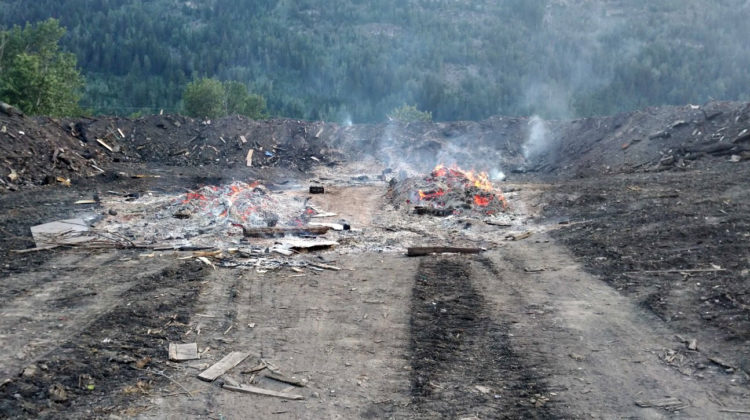 A fire broke out on Tuesday, June 29, 2021 in a wood waste pile at the Sparwood Transfer Station. (Supplied by the RDEK)

Firefighters in Sparwood will return to check on the scene of a fire that broke out on Tuesday in the wood waste pile of the local transfer station.

The Sparwood Transfer Station’s operations were not impacted at the time and will be open as normal on Wednesday.

“We had two roll-off bins of wood catch fire late in the day, and were grateful for the assistance of the Sparwood firefighters in keeping the fire contained to the two affected loads,” said Jim Penson, RDEK Solid Waste Superintendent.

The loads were separated and the RDEK’s site contractors stayed through the night to ensure the pile did not ignite again.

Any remaining hot spots were put out by Sparwood’s Fire Department on Wednesday morning.

“We would like to thank the Sparwood Fire Department, our contractor and site personnel for the excellent work they did yesterday in quickly dealing with this fire and preventing it from spreading,” said Penson.