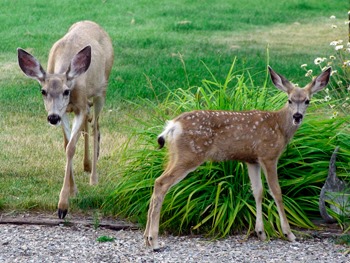 A Kimberley woman has been hospitalized after being attacked by a doe on Wednesday while she was walking her dog.

Danica Roussy, WildSafe Community Coordinator for Cranbrook and Kimberley said the deer caused serious injuries to the woman. It is believed that the doe has one or more fawns nearby.

At the time, the woman was walking her dog near Rotary Drive and Knighton Road.

“There are signs alerting the public, so please be careful when in the area or pick a different route to walk. If you are picking up a child from school today, it would be best to leave the dog at home,” said Roussy.

Does can become more aggressive during fawning season, and WildSafe has offered a few tips to keep safe around wildlife:

“If a deer indicates it may attack you or your pet, avoid eye contact, speak softly and back away slowly. If there is a tree or other solid object nearby, try to get behind it,” said Roussy. “If you are attacked by a deer try to stay upright, cover your head with your arms and move to shelter.”

Deer should be given a wide berth if they are seen in town, and pets should be kept on a leash and under control.

The attack comes as WildSafeBC has put out a reminder for the public regarding fawning season safety.

“Fawns with spots do not have a scent. This means not even the mother can smell it – not a dog, not a coyote, nothing – being scentless is for their protection to basically be camouflaged from predators, so it is best to leave them be,” explained Roussy.

Mother doe will often leave their fawns for in a shady area for hours at a time while she finds food and water.

“Do not pick up a fawn and move it to the forest – this will cause the mother doe to become frantic as she can no longer find her fawn. If you believe a fawn has been abandoned, call the Conservation Officer Service at 1-877-952-7277,” said Roussy.