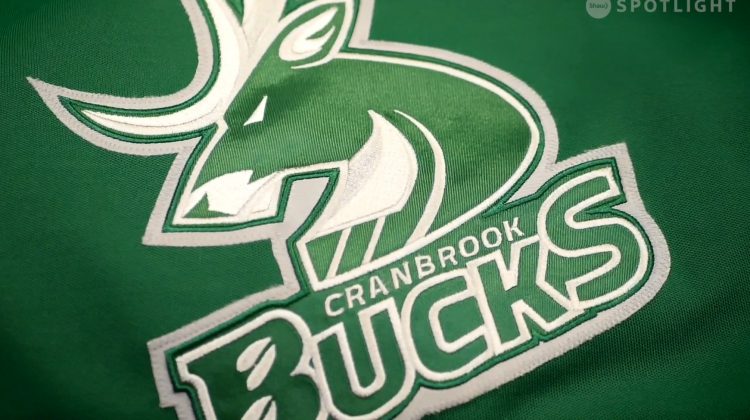 While it was a year of ups and downs for teams across the BCHL, it was even more so for the Cranbrook Bucks, the league’s newest franchise which began play in 2020/21.

From first getting approval of expansion in October 2019, little did the Bucks know what lay ahead just a few months later with the COVID-19 pandemic. Not knowing if they would have fans in the stands or not, regulations and restrictions were ever-changing.

The team was able to get all of its pieces in place by hiring the former Assistant Coach of Yale’s Men’s Hockey Team, Ryan Donald. Recruiting several United States players, the imports eventually left to pursue playing opportunities in the USHL while the BCHL awaited word if they actually would get a season.

While the Bucks did manage to play exhibition games in October and November, the season was abruptly halted just days before the regular season was originally slated to begin in December.

Ultimately, everything came together in the spring. The Cranbrook Bucks stepped onto the ice in Penticton at the South Okanagan Events Centre on April 3rd for their first regular season game. The venue would be home for the next 37 days, alongside the Penticton Vees and Trail Smoke Eaters, Cranbrook’s only two opponents for their condensed 20-game season.

“It was obviously a wild ride right from the very start of the year in the fall there and then all the way to getting to the point where we could play in the pod season,” said Nathan Lieuwen, President and Owner of the Cranbrook Bucks. “Just so happy for our players to get a chance to play and develop and get some exposure, and it was definitely a bit of an emotional rollercoaster, but at the end of the day, to be able to give them that opportunity was very fulfilling.”

“To be able to have the chance to just play hockey games – for our young men and our players that kind of stuck it out over the winter, they would have played the same team every day for 30 straight days I think, just to be able to play some games and have the opportunity to get back on the ice in that kind of competitive environment,” added Ryan Donald, Cranbrook Bucks Head Coach and General Manager. “To be able to do it and pull out all the stops to have it in Penticton, with the hotel set up, meals, everything, it was great to be able to get 20 games.”

Matching up with the Penticton Vees and Trail Smoke Eaters, Cranbrook was arguably in one of the BCHL’s toughest hubs. Penticton has made the Fred Page Cup Championship six times since 2006, winning four titles (2008, 2012, 2015, 2017), and being an annual contender for the trophy. The Trail Smoke Eaters (36-17-2-2-1) were coming off one of their best seasons in recent memory, finishing second in the Interior Division behind the Vees (44-12-1-1-0). As the league’s newest franchise, the Bucks stepped into a regional hub with two of the BCHL’s top clubs before the COVID-19 pandemic.

Donald told MyEastKootenayNow.com that it was a good test for the team and it also gave them firsthand feedback of where they stand against some of the league’s best.

Being close to Penticton and sharing their facilities, Donald said it also gave the Bucks a chance to see how the Vees run their organization up close and personal.

By the end of the season, with a team of mostly rookie players, the Bucks finished last in the Penticton Pod with a 3-16-0-1 record. The team was officially second to last in the entire BCHL, only behind the struggling Merritt Centennials (3-17-0-0).

“Certainly not the record that we wanted to have come out of it. We had our goals internally of what we wanted to do and what we felt like our group could accomplish. We fell short on a couple areas but very proud of our group and the culture that we had and the resilience that we had,” said Donald. “It felt like we were in a lot of the hockey games that we were playing, so certainly encouraging moving forward.”

The Head Coach and General Manager said that by getting a 20-game season, they were able to more thoroughly evaluate the talent they had. As much as they had exhibition games in the fall, and skill development throughout the winter, Donald said the live regular season games were extremely helpful.

“We were obviously a younger team just by virtue of being an expansion team with not a lot of BCHL experience on our roster, but our young players certainly showed well. Our guys that we brought in, that we’ve worked with all year long, showed us glimpses of what we thought they could be as players and now it’s on us as an organization, on them as players, to make that a reality, make that consistent.”

The Cranbrook Bucks had 26 players step onto the ice during their 20-game season, only six had veteran experience, while 20 were rookies, three of those rookies being affiliates. By the end of the year, two rookies and one affiliate led the Bucks in scoring. Rookies AJ Vasko (5 goals, 4 assists) and Zeth Kindrachuk (3 goals, 6 assists) played 16 and 14 games respectively, while affiliate rookie Walker Gelbard (2 goals, 7 assists) played 12 games.

Although the team wanted a better result on-ice, both Lieuwen and Donald are optimistic for the future.

Lieuwen said they are still digesting what happened over the last couple of months and then setting their sights on next year and what that will look like and how they can attract a new round of recruits to the team.

Making major renovations to Western Financial Place in Cranbrook, which included fresh paint, new boards, updated boxes, and a new video scoreboard, the idea of getting fans in the building to see their first BCHL game, is extremely exciting.

“I’ve got a lot of feedback from a lot of the players, they just can’t wait to play in front of a fanbase that loves hockey and in front of a lot of fans, because a lot of these guys haven’t before, especially with the market that we have here in Cranbrook,” said Lieuwen. “We got a great fanbase and good sponsors, so it’s going to be an experience for those guys when they get that opportunity.”

The hope is that fans will be allowed into Western Financial Place for the start of the upcoming 2021/22 BCHL season, which would allo the community to finally witness the first official home game for the Cranbrook Bucks in the BCHL.

All-in-all, the Bucks are thankful and grateful that a BCHL season was able to materialize, noting it wouldn’t have been possible without the efforts of the ownership group, sponsors, billets, academic support, and community members.

“The on-ice product is one small facet of what it actually takes to make this organization run,” said Donald. “Certainly in a year where we didn’t have the home games, we didn’t have the opportunity to be out in the community and be able to put a face to a name as much as you normally are able to.”

“These guys poured everything they had into our 20 games that we had in Penticton.”

It’s expected the upcoming BCHL season will begin in early September, pending any COVID-19 restrictions and regulations. It should be a season where the Cranbrook Bucks will be able to play their first game in front of a hometown crowd, and truly begin to build a new legacy of Junior A hockey in the community.

Below are highlights from the BCHL’s Penticton Pod for the 2020/21 season: