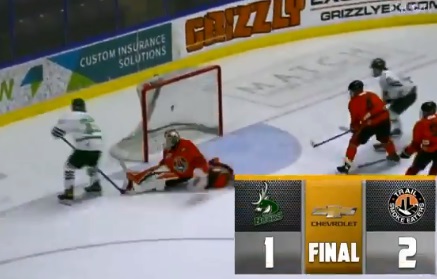 Trail's Logan Terness stopping Cranbrook's AJ Vasko in the Smoke Eaters 2-1 victory over the Bucks on Saturday. (Supplied by BCHL) 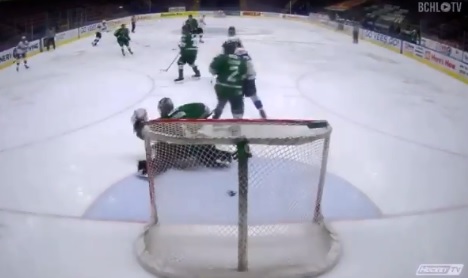 Bucks goaltender Jay Thomson allowing a goal from the point against the Penticton Vees on Friday. Penticton would win 5-1 to stretch Cranbrook’s losing streak to four games. (Supplied by BCHL)

The Cranbrook Bucks are taking a five-game losing streak into their final week of the BCHL season, after dropping both of their weekend matchups with the Penticton Vees and Trail Smoke Eaters.

Facing off with Penticton on Friday, Noah Liebl would net his third of the season to draw the Bucks even at 1-1 heading into the second period. However, the Bucks would surrender four unanswered goals the rest of the way, losing 5-1.

Jay Thomson made 23 saves in the loss for the Bucks while Kaeden Lane stopped 25 of 26 for the Vees.

Prince George, Alberni Valley, Penticton, Vernon, and Powell River were the winners on a LOADED Friday night in the BCHL. Check out the highlights!#BCHLTonight | @ChevroletCanada pic.twitter.com/5PkQQvaNlm 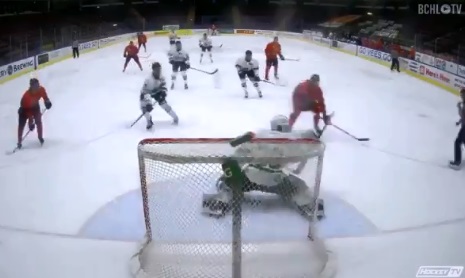 Bucks netminder Nathan Airey being beat on a Trail Smoke Eaters 2-on-1 in Saturday’s 2-1 loss. (Supplied by BCHL)

Looking to rebound on Saturday, the Bucks battled the Smoke Eaters, although Cranbrook would fall 2-1 to their Kootenay rivals.

Firing 47 shots on goals, Trail would solve Bucks netminder Nathan Airey twice in the second period. Airey’s 45 saves are a career-high in the BCHL.

Meanwhile, Logan Terness made 37 saves for the Smoke Eaters, but the Bucks would spoil his shutout, scoring their only goal of the contest with just one second left in the game.

Raise your hand if you are a BCHL team and you scored 1, 2, 5, or 6 goals in your game tonight 👋#BCHLTonight | @ChevroletCanada pic.twitter.com/STIhRnYZSA

With just four games remaining on their BCHL schedule, the Bucks will close out their season this week with two more games against the Vees and Smoke Eaters.

Cranbrook and Penticton take to the ice on Monday at the South Okanagan Events Centre for one of those contests. Puck drop is set for 8 p.m. MT as the game can be watched on Shaw TV or BCHL TV.