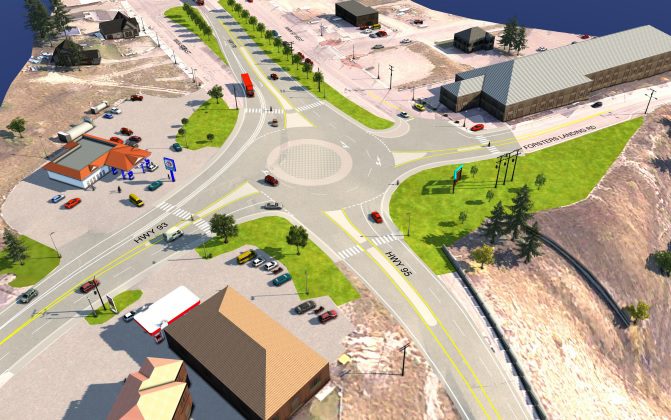 One of the roundabout concepts for the Highway 93/95 intersection in Radium Hot Spring shared at an Open House with the public Wednesday, September 4, 2019. (Supplied by B.C. Government)

A large public contingent showed up last week for an Open House in Radium Hot Springs, regarding improvements and plans to convert the existing the four-way stop in the community to a traffic circle.

“The intersection at Radium, the four-way stop, has been a problem for a long time,” Clara Reinhardt told MyEastKootenayNow.com, Mayor of the Village of Radium Hot Springs. “From talking to the engineers, some of them have been working on this project as a potential idea since 2012, so this is not new.”

Reinhardt believes the impetus to make it happen now, is the growing numbers of people coming through the community, as the B.C. Government is moving forward with plans to turn the Highway 93/95 intersection into a roundabout.

“They looked at all of the options and one of the challenges is the inconsistent traffic patterns,” said Reinhardt, noting that closures and traffic events on Highway 1 are detrimental to Radium’s four-way stop. “By the time you get Parks Canada, the RCMP on Highway 93, the RCMP and Parks Canada on Highway 1, talking to the Ministry of Transport and talking to our people, the traffic’s backed up for kilometres before anybody even knows and can get flaggers out there, it’s just not manageable, hence the traffic circle.”

The project is estimated to cost $11.9 million but is cost-shared with the Federal Government and the New Building Canada Fund, Provincial-Territorial Infrastructure Component -National and Regional Projects. In total, the B.C. Government is committing $7.1 million to the Radium project.

Looking to maintain consistent traffic flow no matter the conditions, the speed limit will remain 50 km/h from the canyon and function as a low-speed traffic circle that all vehicles will have to yield before entering.

A total of 174 people attended the Open House on Wednesday, September 4, 2019. Reinhardt told the Regional District of East Kootenay on Friday that 100 people is considered to be a great turnout for an Open House, but that the public is highly engaged with this important community project.

“They had a lot of staff on board and it was to answer questions, people don’t know, there’s a serious fear of the unknown, so people were very grateful to have the time to air their concerns, ask questions and I think most them came away pretty happy.”

The roundabout project is currently in the design stage, as the B.C. Government intends to have the project out to tender by early 2020. Once the contractor has been chosen, construction on the traffic circle is anticipated to begin in spring 2020 and finish by the late fall 2020.