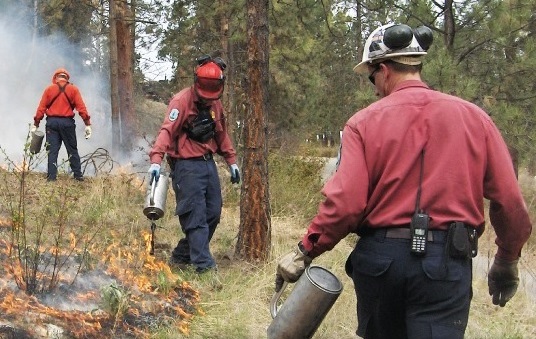 (Supplied by BC Wildfire Service)

As early as Monday, the BC Wildfire Service will be undertaking a 320-hectare prescribed burn near the old Kimberley Airport, and another 131-hectare ecosystem restoration burn in Premier Lake Provincial Park.

Another 14-hectare burn is also planned for Wednesday in the Forest Crowne area near Kimberley.

The larger 320-hectare burn is being done in conjunction with Rocky Mountain Trench Society and the Rocky Mountain Resource District, with the burn area approximately 18 kilometres east of Kimberley and 23 kilometres north of Cranbrook.

“Smoke may impact residents close to the burn area and will be highly visible from Kimberley, Cranbrook and surrounding communities, and to motorists travelling along Highway 93 and 95A,” said the BC Wildfire Service.

While the exact timing of the burn will depend on the weather and conditions at the site, the BC Wildfire Service intends to ignite the prescribed burn on Monday.

The other 131-hectare ecosystem restoration burn will be taking place in the Quartz Lake area of the Premier Lake Provincial Park, about 7 kilometres east of Skookumchuck.

The BC Wildfire Service said smoke will be visible from Skookumchuck, Wasa, surrounding communities, and motorists travelling on Highway 93/95.

“The exact timing of this burn will depend on weather and site conditions, but it could begin as early as Monday,” added the BC Wildfire Service. “Burning will proceed only if conditions are suitable and allow for smoke dispersal, though light smoke may linger in the following days.”

Wednesday’s 14-hectare burn in the Forest Crowne area will be supported by the City of Kimberley.

“The prescribed burn is located within the limits of the City of Kimberley,” said the BC Wildfire Service. “Smoke may impact the residents close to the burn area and will be highly visible from Kimberley, Marysville, and surrounding areas. Smoke will also be visible to motorists travelling along Highway 95A and Highway 3.”

While the burn is slated for Wednesday, it again depends on site conditions and the weather. The BC Wildfire Service said the aim of the burn is to reduce the accumulation of dead wood and combustible materials, regenerate ecological biodiversity by suppressing overgrowth, and reducing the severity of any wildfire risks.