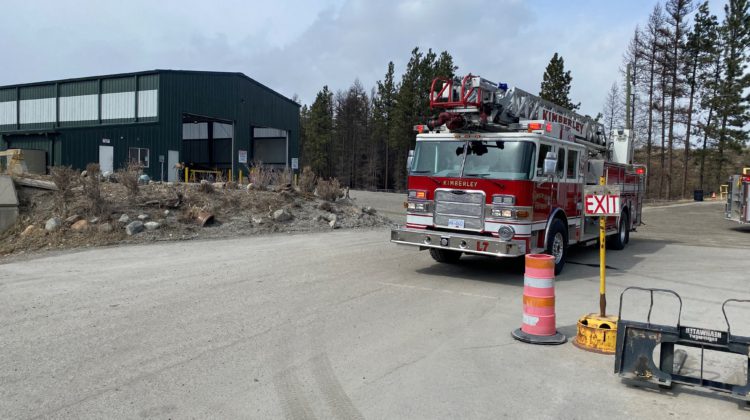 The evacuation of the Kimberley Transfer Station on Sunday, March 28th, 2021 due to a punctured can of bear spray. (Supplied by RDEK)

Emergency responders were called Sunday afternoon after strong fumes were encountered by workers at the Kimberley Transfer Station, who were unsure of the potential threat.

The entire facility was closed for a brief time until the fumes were identified as a punctured canister of bear spray.

“We immediately evacuated the main building and called first responders to investigate,” explained Jim Penson, RDEK Solid Waste Superintendent. “Firefighters responded and conducted thorough testing in the building. Once it was deemed to be safe and clear of any noxious fumes, the site was re-opened.”

In total, the facility was closed for about an hour before regular operations continued.

The entire incident is prompting strong reminders to the public to ensure their hazardous wastes are properly disposed of.

“We were lucky that our staff were not seriously hurt,” said Penson. “If people are unsure about how to safely dispose of items, we urge them to contact us.”

Residents can visit the RDEK’s main recycling page to determine what can and cannot be recycled, what is accepted at the region’s various Transfer Stations, and where to take hazardous materials.

MORE: Recycling in the RDEK (Regional District of East Kootenay)

“It starts with personal responsibility,” added Penson. “If you are in doubt or unsure about how to safely dispose of something, throwing it in the garbage is not the right answer and could put people’s safety at risk.”

The investigation by first responders found that the improperly disposed canister of bear spray was punctured while in the process of the waste being transferred from the floor onto the truck, releasing its contents in the facility. The RDEK said bear spray canisters can specifically be taken to Kimberley’s Bavarian Home Hardware or to the Household Hazardous Waste Depot at the Cranbrook Transfer Station for safe disposal.

“We would like to thank our staff for acting quickly and for following the safety procedures to protect themselves and the public, and the first responders for their assistance in ensuring the site’s safety.”