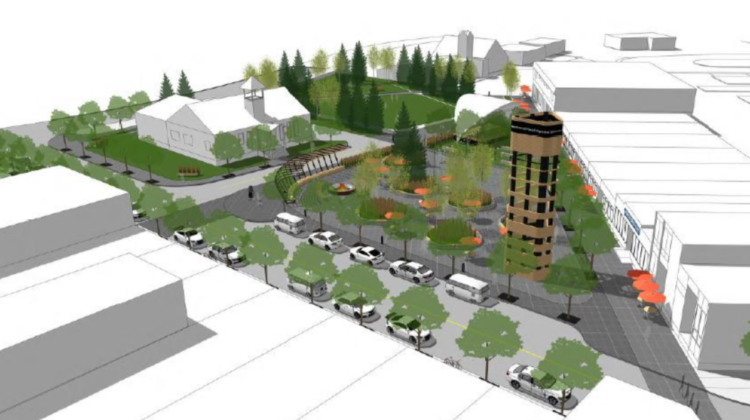 A rendered depiction of what Sparwood's Centennial Plaza Revitalization Project could look like. (Supplied by the District of Sparwood)

The District of Sparwood is looking for public feedback after it unveiled a new concept design for its Centennial Plaza Revitalization Project.

According to Sparwood, the redesign will cost a total of $6-million. It added that funding will come from a combination of sources, with almost $3-million in borrowing, $1.86-million with grants and a further $1.15-million from reserves.

Mayor David Wilks said the plan is to make the revamped square a year-round destination for residents and visitors alike.

“We want it to be a gathering place for the public, both in summer and winter. I think there’s a great opportunity for businesses to take advantage of this as well,” said Wilks. “It’ll also give people a place to gather throughout the year.”

The District showed that the new design will feature a number of amenities, including a skating trail, a staging area, and water features, among others.

Wilks said the square’s new concept design was made after the District had to go back to the drawing board.

“Some of the things that we thought of and the consultants brought forward the first time seemed a little over the top for the public. A permanent skating area which was able to make ice was a little more than what the public wanted,” said Wilks. “We looked at a bandstand type of facility for outdoor concerts in the summer. That’s what we heard people wanted.”

Improvements to the surrounding streets, accessibility upgrades to the municipal office, and parking access will be included in the revitalization project.

Residents have an opportunity to provide their thoughts on the new design ahead of  March 16th at 4 p.m., when the District Council is expected to review and approve the redesign.