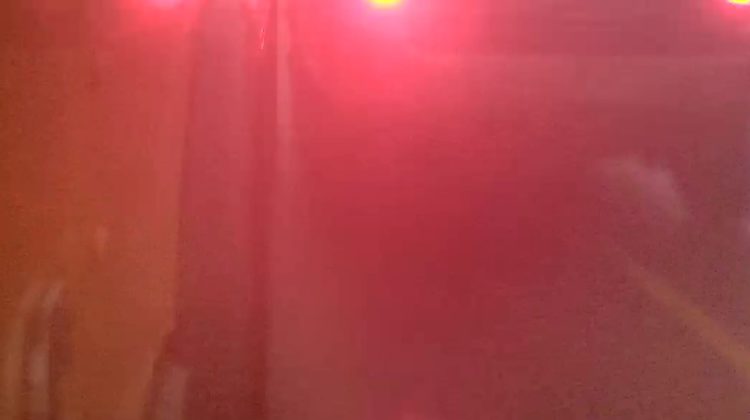 A freeze frame of the school bus video showing the near miss between a dark coloured vehicle and the bus the morning of February 23rd, 2021. (Supplied by Cranbrook RCMP)

Cranbrook RCMP is asking the public to help identify a dark-coloured vehicle, believed to be a small SUV, that nearly hit a school bus near Campsal Road before the Fort Steele hill.

According to RCMP, they were notified of the close call on February 23rd, 2021. Police said the incident occurred around 7:00 am.

Cst. Katie Forgeron said the school bus had just picked up students on the roadway and was beginning to get up to speed. Video of the incident then shows the vehicle crossing the centre line and narrowly missing a collision with the bus.

“It is a miracle that no one was injured in this incident. The SUV appears to make limited contact with the bus before it corrects itself and gets into the proper lane,” said Forgeron. “It is incidents like this that remind us of the realities that bus drivers and students on those busses face every day.”

At this time, Cranbrook RCMP is searching for anyone who might have been in the area, or who might have dashcam video of the area leading up to the incident between the SUV and the school bus. Those with information are asked to either contact the Cranbrook RCMP detachment at 250-489-3471 or to phone Crime Stoppers at 1-800-222-TIPS (8477).

“The RCMP is also still receiving complaints of vehicles continuing to drive when the amber lights are flashing on the school bus, instead of slowing down to wait the two or three minutes it takes for kids to get safely on and off the bus,” added Forgeron. “When drivers see the amber flashing lights they should start to stop, knowing that the red lights are coming next.”

In recent weeks, RCMP said East Kootenay Traffic Services and Cranbrook members have made a point of following school buses.

“Officers are on bus routes with the highest amount of drivers ignoring the red flashing lights and driving by, seemingly unaware of the danger they are putting children and bus drivers in.”

Watch the full video the incident between the SUV and the school bus below: