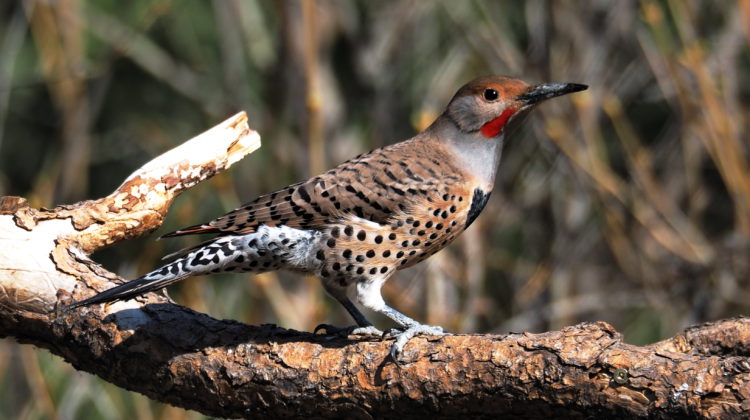 Over the year-end holidays, the Rocky Mountain Naturalists coordinate the Christmas Bird Counts in Cranbrook and Kimberley.
Volunteer counters go into the field or watch their home feeders to record every bird spotted around each community.
These data and similar data from over 2,500 location across the western hemisphere collected over the past century are added to the longest-running community science project in the world.  This wealth of information on winter bird populations is used to aid bird conservation.
For participants, it’s a great day of winter birding and a great way to learn our resident birds and winter visitors. 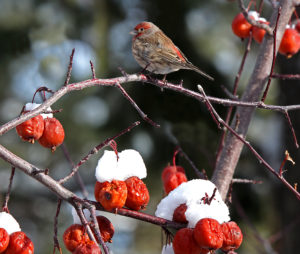 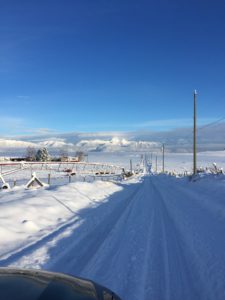 Kimberley Bird Country – The roads were very icy but the intrepid 15 field counters that took part in the Kimberley Christmas Bird Count did their best and managed to find a really good number of species.  There were no new species for the count, just good tracking down of what is often around.

Kimberley’s average is 43 species but we got 50 this year, so that’s great!  There is a little bit of rivalry between Cranbrook and Kimberley counts but since it is mostly the same people doing both, it is all in fun.  The Cranbrook count, on Boxing Day, got 47 species which is about average for that circle.

Birders are naturally optimistic; (or perpetually unsatisfied perhaps?), because we are always hopeful when we go out birding that we will get something different; but if we don’t, we are happy with seeing or hearing any of the birds around – they’re all beautiful.

For the Christmas Bird Count, one goal is to contribute a species that no other team has managed to spot (or hear).  This year, without teamwork we may have missed the Red-tailed Hawk, the Northern Pygmy-Owl, the Belted Kingfishers, the Canada Jays, the Chestnut-backed Chickadees, the Snow Buntings, the Brown Creeper, the Spotted Towhee – and more.

The Cranbrook count was special because it was only the second time we got a Woodpecker Grand Slam!  – All the possible winter woodpeckers:  the more common Downy, Hairy, and Pileated Woodpecker and Northern Flicker, PLUS the rarer Black-backed and American Three-toed Woodpeckers.  The total number of birds seen was the fourth highest in the 23-year history of the count – which is surprising because there weren’t the large numbers of waxings and redpolls we sometimes get.  But there were new maximum numbers for several species – like MALL-ARD (something can still hang out at the mall), but also the woodpeckers, and everybody’s favourite Mountain Chickadee.

I haven’t had a chance to look at the Kimberley numbers in detail yet, but it is not often that Kimberley gets more species than Cranbrook mostly because Cranbrook has more species of ducks – such as at the sewage lagoons.  Also,  with the Kimberley count being in January and the Cranbrook one in December, the weather is often worse for the Kimberley count.  But not this year! … except for the icy roads – it was so icy going down one hill, a field counter had to identify that American Three-toed Woodpecker while he was sliding down the hill – couldn’t stop, even though he had studded tires.

I was worried when the forecast called for rain.  Rain in January! But it was sunny and calm out in Ta Ta Creek in the morning – warm enough to take your gloves off (unlike that other year when it was -26).  It was so balmy, the meltwater atop someone’s compost bin was warm enough for a chickadee to have a bath!

What did I miss that the average person would be interested in?  PS We like to have the Kimberley count in January because it gives us a head start on our “year list” – the number of species we see in a calendar year.

Full count results will be posted on our website (Cranbrook results are already up) at Rocky Mountain Naturalists dot org.

Field observers participating in one or both counts (Cranbrook and/or Kimberley) totalled 25 birders and friends, all local residents, and 21 people contributed feeder counts.
The Cranbrook circle goes from St. Eugene Mission to Green Bay (Moyie Lake) and from Old Wycliffe to Gold Creek.  Also included is the Trans-Canada Trail to Rampart Rest Area.

The 47 species recorded on count day was above the average of 43 species for the Cranbrook count.

This year’s count can go down in history as only the second time we got a Woodpecker Grand Slam!  We saw all the possible species of winter woodpeckers: Downy, Hairy, Northern Flicker, American Three-toed, and Pileated on count day and a Black-backed during count week.  The only other time for a Woodpecker Grand Slam was Count #113 in December 2012.  Not only that, three of the woodpecker species seen had record high numbers.

The Kimberly circle goes from Wycliffe, the north side of the Saint Mary’s River to Wasa, and from Bummer’s Flats to the base of the Kimberley ski hill, encompassing Ta Ta Creek, Meadowbrook, Kimberley and Marysville.
New Record for Total Species for Kimberley!
This year’s count can go down in history for when we set a new all-time record for number of species – 51 species!  The previous record of 49 species was set only two years ago in January 2019.

No new species were recorded for the count this year; we just managed to get a good percentage of the 79 species we’ve ever gotten on count day including those naturally low in number and usually uncommon.