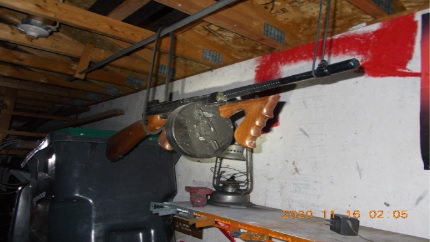 A Sparwood man has been arrested by Elk Valley RCMP for his alleged connection to a break and enter at Sparwood Communications on Monday.

Police said the man stole an expensive radio and an extension cord and was identified on CCTV footage. Well known to Elk Valley RCMP, they said the man was arrested following a brief foot chase.

“In addition to being charged with break and enter plus theft, the officers quickly learned that the male was on conditions to not possess any firearms or ammunition.”

“The sharp-eyed officers located an air-nailer which the male had used to ‘take out’ his neighbour’s windows in a previous incidence report to the police,” said Elk Valley RCMP.

Seizing the items following the man’s arrest, he was then released for his future court date.